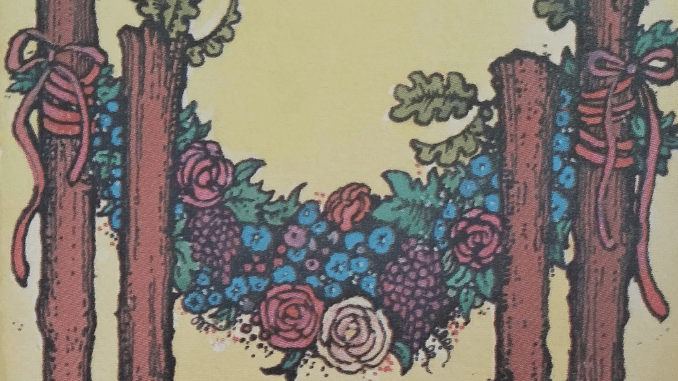 All the fours are associated with Jupiter and have to do with the material ordering of creation or of matter. The Four of Rods is known as the Lord of Completion and attributed to Venus in Aries. What might elsewhere be seen as a conflict between the feminine and voluptuous tendencies of Venus as opposed to the masculine and martial qualities of Aries, are here brought under the harmonious and expansive influence of Jupiter, so that the pair are more like the (4) Emperor and (3) Empress who, have appeared well dignified to us this week. It should be noted that the (3) Empress-as-Venus also appeared on Tuesday, the day dedicated to Mars (the Roman name of the god Aries).

Thus today’s Four of Rods is a very favourable arcana, celebrating the harmonious interplay of venusian love and both jovial and martial power.

It is also worth mentioning that today, Wednesday, is dedicated to Mercury. Mercury is in retrograde, but is currently sextiling Venus, our lady to whom today’s arcana is dedicated.

Meanwhile, the waxing crescent Moon is now in practical and inquisitive Gemini, which happens to be ruled by Mercury. Thus today is a good moment to communicate – or to clarify to ourselves – what we are passionate about and why, and to celebrate or simply appreciate any new insights that arise from reappraising our goals and aspirations.

Celebrate the solid foundations that you are laying down in your life right now; that is the essence of what the Four of Rods is all about. Bless the ground – physical and metaphysical – upon which you stand. Bless the moment in which you are living right now, and bless the Divine Ground in which you live, move and have your being. Communicate with joy as you go about your business today; in doing so you will be laying down solid foundations for good to come into your life.