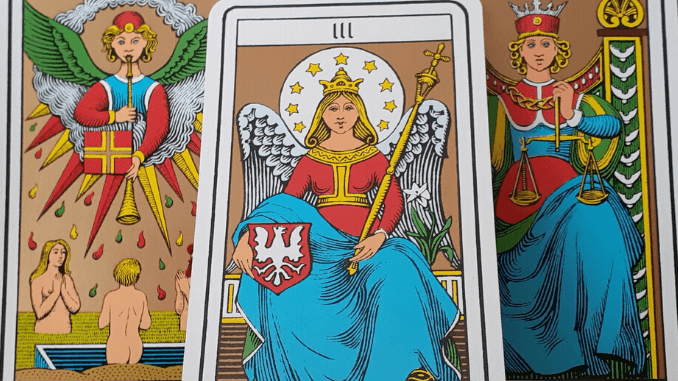 The lacuna between the ascension of Christ and the descent of the Holy Spirit, the Comforter is a nine-day period of prayer and preparation. The Holy Spirit is not yet manifest and we are left with the cold prospect of (8) Justice to meditate upon during this period as we approach Pentecost, which occurs on the Jewish feast of the Passover, the day when the first fruits of the wheat harvest were offered, completing the cycle of reaping what has been sown. Thus the karmic aspect of this season is evident prior to the breaking in of the Holy Spirit in which Karma is displaced as it were by Grace:

“Gratia gratis data…” The sun shines on the good and wicked alike. Is this morally right? Is it the justice of grace here which is higher than the protective, distributive and punitive justice of the law? This is so. There is the sublime “other justice” of grace, which is the meaning of the New Testament. For the Old Testament is to the New Testament as karma is to grace. Grace also makes use of the balance, i.e. justice. It is the balance whose one scale is on the earth and whose other scale is in heaven. The Lord’s prayer reveals to us the principle of the justice of grace and the operation of weighing by means of the “heaven-earth” balance. There it is said: “Forgive us our trespasses, as we forgive those who trespass against us.” And then the Master adds: “For if you forgive men their trespasses, your heavenly Father also will forgive you; but it you do not forgive men their trespasses, neither will your heavenly Father forgive your trespasses (Matthew vi, 12, 1415).

O God the King of glory, who hast exalted thine only Son Jesus Christ with great triumph unto thy kingdom in heaven; We beseech thee, leave us not comfortless; but send to us thine Holy Ghost to comfort us, and exalt us unto the same place whither our Saviour Jesus Christ is gone before, who liveth and reigneth with thee and the Holy Ghost, one God, world without end. Amen.

As every man hath received the gift, even so minister the same one to another, as good stewards of the manifold grace of God.

The trumpet shall sound, and the dead shall rise again incorruptible. I will give unto every one of you according to your works.