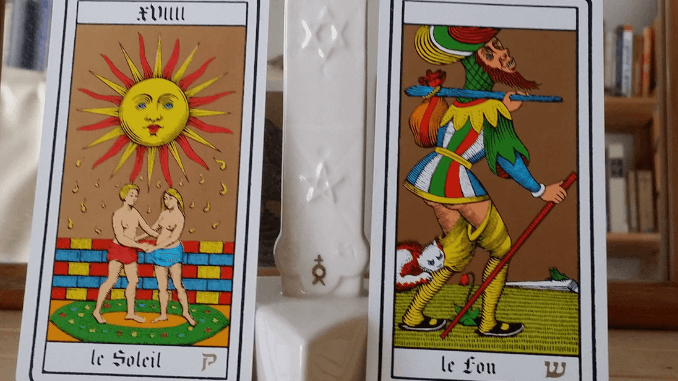 Trinity, the longest season of the year, begins today, and with it begins the Fool‘s journey through the houses of the Upper Arcana, presided over by the seasonal arcana of the (19) Sun. During this season I also display an image of The Holy Family, by Raffaello Sanzio, the original of which I saw at an exhibition of treasures from the Hermitage Museum at an exhibition in Hiroshima back in the 1990s.

The Holy Family as Earthly Symbol of the Trinity

The Holy Family may be seen as an earthly symbol of the Trinity, as noted by the 18th century Jesuit commentator, Cornelius à Lapide,

Symbolically, in this marriage and family union of Joseph with Mary there was an image of the sacred Trinity. For Joseph represented the eternal Father, the Blessed Virgin the Holy Spirit, both because she was the most holy, and because she had conceived by the Holy Spirit. Christ represented Himself, even the Son of God. Hence, as there is in the sacred Trinity essentially one God in three Persons, so here was there one marriage and one perfect family, consisting of three persons, namely, Joseph, Mary, and Christ… This family was then, as it were, a heaven upon earth…

The Doctrine And Symbols of the Holy Trinity

The doctrine of the Holy Trinity is most succinctly expressed in the Athenasian Creed:

The doctrine is illustrated in the emblem that is displayed on the shields and banners of churches dedicated to the Holy Trinity and in various triangular or trefoiled symbols which are often seen in gothic church architecture of the high middle ages.

Almighty and everlasting God, who hast given unto us thy servants grace,
by the confession of a true faith, to acknowledge the glory of the eternal Trinity, and in the power of the Divine Majesty, to worship the Unity: we beseech thee, that thou wouldest keep us steadfast in this faith, and evermore defend us from all adversities, who livest and reignest, one God, world without end. Amen.

Where wast thou when I laid the foundations of the earth? declare if thou hast understanding.

The wind bloweth where it listeth, and thou hearest the sound thereof, but canst not tell whence it cometh, or whither it goeth: so is every one that is born of the spirit.

I am the light of the world. Whoever shall not receive the kingdom of God as a little child, he shall not enter therein.