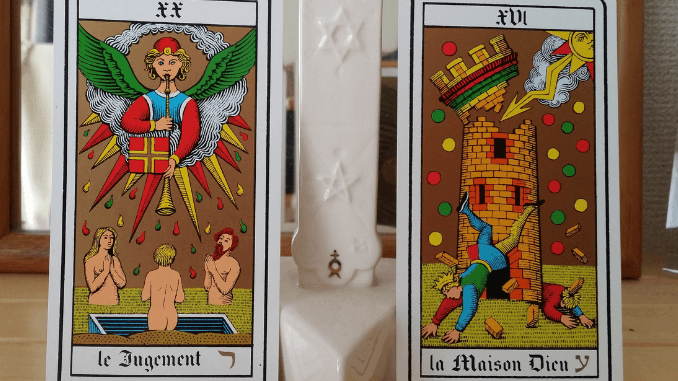 The arcana for Whitsun is the (16) Tower, which is named “The House of God” in the Oswald Wirth deck which we use to mark and contemplate the liturgical year. We see in the upper right corner the Divine Sun breaking open the tower with a lightning bolt, reminding us of the suddenness of the descent of the Holy Spirit and the dramatic transformation it wrought, turning the huddling disciples into bold apostles of Christ.

The Old Testament “antitype” of these events is really the building of the Tower of Babel, the story in Genesis of the attempt of men to build a tower whose top would ascend to heaven – an arrogance which the Lord God punished by the “confusion of tongues”, which is ordinarily held to be the origin of the fact that men speak different languages. Contrariwise, when Christ truly ascends to heaven he sends upon his Apostles the Holy Spirit with the “gift of tongues” – the power to speak a language which all men will understand.

When we are in “Babel” consciousness we feel alienated one from another, confused, self-centred and unable to communicate or sympathize with others. But when the Dove of Pentecostal inspiration descends upon us, we are suddenly able to forget ourselves and reach out to others and commune with them in language that they understand.

When this happens, our creative facility is awakened and the Logos speaks through us communicating with an subconscious insight that is often shocking in its ability to come into the path of the listener and as it were intimately reveal to him the path he has been treading.

Even so, not all who hear and understand the message will respond to it. There will always be those who prefer to mock and joke that those who are moved by the Holy Ghost must be drunk on “new wine” to find such sudden inspiration:

And they were all amazed, and were in doubt, saying one to another, What meaneth this? Others mocking said, These men are full of new wine.

Babel or Pentecost? Amazement or Mockery? Hope or Despair?

T. S. Eliot lays out the Pentecostal choice, if choice it be, as one of two pyres:

The dove descending breaks the air

With flame of incandescent terror

Of which the tongues declare

The one discharge from sin and error.

The only hope, or else despair

Lies in the choice of pyre of pyre –

To be redeemed from fire by fire.

Who then devised the torment? Love.

Love is the unfamiliar Name

Behind the hands that wove

The intolerable shirt of flame

We only live, only suspire

Consumed by either fire or fire.

God, who as at this time didst teach the hearts of thy faithful people, by the sending to them the light of thy Holy Spirit: Grant us by the same Spirit to have a right judgement in all things, and evermore to rejoice in his holy comfort; through the merits of Christ Jesus our Saviour, who liveth and reigneth with thee, in the unity of the same Spirit, one God, world without end. Amen.

I will pour out my spirit upon all flesh; and your sons and your daughters shall prophesy, your old men shall dream dreams, your young men shall see visions.

The trumpet shall sound, and the dead shall rise again incorruptible. I scatter the proud in the imagination of their heart.