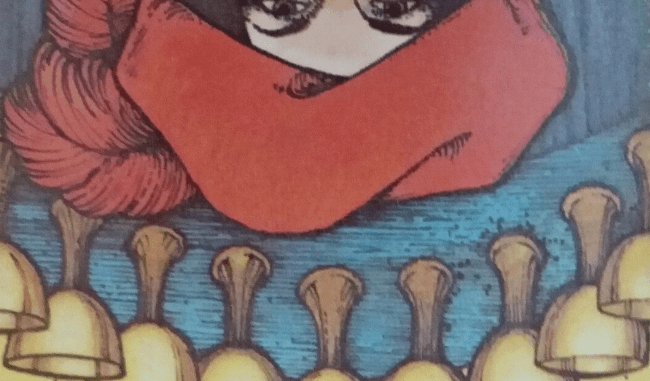 The Nine of Cups is associated with the ninth Sephirah of the Kabbalistic Tree of Life, which is influenced by the Moon. Today and tomorrow the moon is in its balsamic phase, that is, it is waning gibbous and emptying itself of all light preparatory to the New Moon phase which begins the second lunar month of the decade on Friday 24th January.

Other planets involved in today’s arcana are Jupiter, because the Nine of Cups is ruled by Jupiter in Pisces, and Mercury, to whom Wednesdays are dedicated.

Now there be many an interpreter of the Tarot who tell us that the Nine of Cups reversed conveys negative meanings such as over-indulgence, smugness, dissipation and so forth.

However, I do not think that is so because such is not the character of Jupiter or the quality Pisces. Where Jupiter governs, there is not so much a negative quality reversals as an abeyance, or a call to rejuvenate or reorient that of which the arcana speaks.

A Message From Mercury

We may treat today’s appearance of the Nine of Cups Reversed as a message from Mercury, whose counsel we ought to heed.

Indeed, we take note of the planets in this way not only because they occupy celestial space but also because they live, move and have their being in the mansions of the soul and reveal to us its quality at any given time.

The Moon and the Soul

The planet which is closest to the soul, and to which indeed the soul may be likened is the Moon, or “Luna.” Learn, therefore, to speak of your soul as “my Luna.” Consider her in relation to the other planets, as the Renaissance Magus Marsilio Ficino teaches in a letter to the young Lorenzo di Pierfrancesco de’ Medici:

Your Luna should also behold Jupiter, the laws human and divine… She should also direct her gaze on Mercury, that is on good counsel, reason and knowledge.

So let us direct our gaze on Mercury to understand the context in which his counsel is offered. To do so we first need to ascertain and interpret the location of Mercury in the heavens.

Mercury is currently in the fiery ninth house (associated with Jupiter and expansive Sagittarius) where he naturally takes on the role of teacher especially of the higher or deeper things in life. As I mentioned, the Nine of Cups Reversed has a depth to it which Mercury would have us appreciate today.

Mercury is also transiting Capricorn, during which time Mercurial discourse takes on an analytical character, such as we see in this blog post about the Nine of Cups! One writer, discussing Mercury in Capricorn, speaks of a

need to see things in grids and charts.

So here is a chart of the planetary alignments on Wednesday 22nd Janaury 2020:

Turning now to the Moon and Jupiter, we see that they are both in the eighth house of “mors,” or death or “personal transformation,” in the constellation of expansive Sagittarius. It is as if Mercury and Jupiter are colluding!

In this location Jupiter encourages us to broaden our horizons and to see things from a more optimistic and cheerful perspective, which underlines what I mentioned earlier: the Nine of Cups Reversed, ruled by Jupiter, does not convey an inherently negative meaning.

The Kenosis of the Moon

So, what of our soulful, balsamic Moon? The moon is going through it’s phase of kenosis, or emptying out, right now. This process is described by Thomas Moore in The Planets Within as,

a lunar activity and therefore a natural rhythm of the psyche… an imaginative acknowledgement and appreciation of the process of ending: wane, rot, entropy, decay, and death.

Thomas Moore, The Planets Within, p. 162

This process of lunar kenosis is especially emphatic when it occurs in the eighth house. What is more, Saturn is in the same house at this time, seeking to control the process of self-emptying.

What we see, then, in the Nine of Cups Reversed at this time is an acknowledgement that all which we enjoy of life’s blessings and pleasures today is but a fleeting thing which, nevertheless, should be appreciated and enjoyed all the more simply because those things mark the passage of time into eternity.

The overturning of the Nine of Cups represents the emptying out of the Moon, the ending of all in death, but also, thanks to the presence of Jupiter alongside the Moon in Sagittarius, the melancholia of Saturn can be kept at bay, and the “bigger picture” which Sagittarius offers can be grasped.

Appreciating Change and the Fragility of All Things

What is the bigger picture in this context? It is that not only should we appreciate the blessings we receive in this life and take enjoyment in our material pleasures, but that we should also learn to appreciate their fragility and see the ephemeral nature of things and of time itself as something to take pleasure in; something to delight our souls today and each and every day that is left to us.

In that sense, the Nine of Cups Reversed takes us back to the ninth sephirah, the foundation, close to the foot of the middle pillar of the tree of life, Yesod, which is the creative process of moving from one condition to another; our passage is from the condition of merely enjoying the material pleasures of this life, as suggested by the Nine of Cups, but of enjoying those pleasures while acknowledging their fleeting nature, and learning to appreciate the quality of change and of passing away in itself. Cheers!