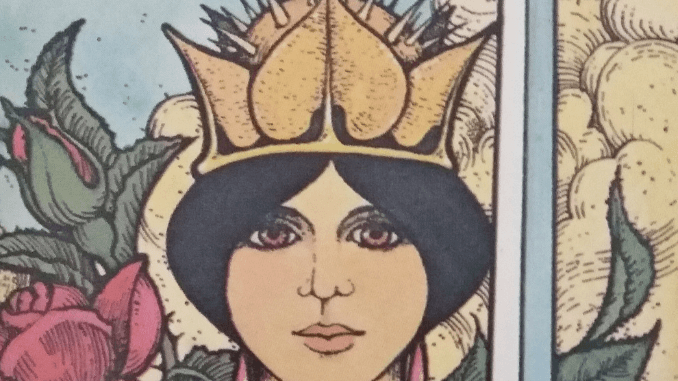 This is the third Sword arcana in as many days this week and the good news is that the Queen of Swords offers to bring clarity to bear on whatever situation you are in right now. The intense energy of the Ace of Swords on Sunday found its first expression in the eight of Swords on Monday about which I spoke in yesterday’s blog. The Queen of Swords is immensely positive as far as the mental clearing process is concerned because there is support in the sidereal alignment of the planets, whose distribution Athen Chimenti explains in his video for today:

With the Moon is waning into emptiness in deep and healing Ophiuchus (the constellation of the serpent bearer which crosses the ecliptic between the constellations of Scorpio and Sagittarius), now is a good time to redeeming the deeper qualities of ourselves, or for forgiving and reintegrating aspects of our past which we may have rejected or shut out and of our life; it is also a good time to complete any shorter term projects which we began towards the end of last year.

Added to that is the entrance of the sidereal Sun into Capricorn, which places more emphasis on the discipline and patience required for longer term projects to work themselves out with time.

The Queen of Swords looks with a clear vision into the secrets of the soul no less than into what is needed in the shorter and longer term for our projects “out there” in the world, so harness her energies to the current disposition of the the Moon and the Sun to gain clarity over your inner and outer states of being today.

On a personal note, after returning home from work I made use of today’s energy to clear some old boxes of a jumbled mass of diaries, notebooks, documents, photos, and other stuff. I separated the items into clear categories, shredded documents that I no longer needed or felt attached to, and organized my photos into various piles according to the time in which they were taken.

I bought some plastic A5 file boxes to store the photos. Seeing those old photos and documents caused me to feel more deeply than before a sense of acceptance and reintegration of my past selves. This was very much the Queen of Swords in action, dividing with clarity and bringing order and with it a sense of peace and gratitude for the past and the present.