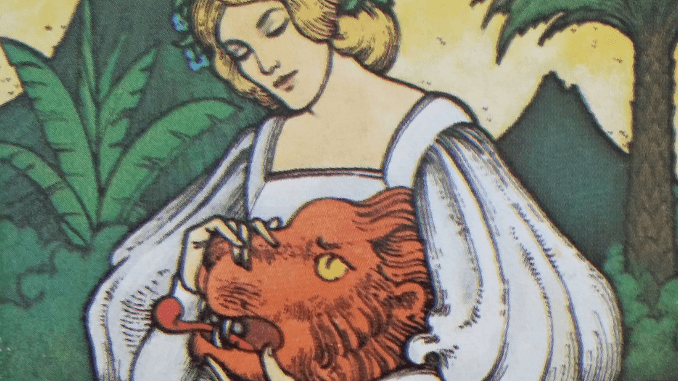 With the sidereal Sun still in fiery Leo, my ruling sign, it is pleasing to draw (8) Strength in this the 11th Week of Trinity, which is represented by (11) Strength in the older order of the Upper Arcana and the Oswald Wirth deck that I use for the liturgical year. (8) Strength is ruled by Leo and Leo is also my ruling house.

In the arcana of (8) Strength we see a fiery lion rendered docile through the gentle offices of a maiden whose white dress gives her, like the priests of Jupiter who also wore white, a Jovial quality of quiet authoritative strength which mollifies and moderates the potential ferocity of the lion, or Leo and the solar heat, or element of fire which is associated with the arcana of (8) Strength, causing sweetness to come forth from the strong. It should also be noted that with reference to Jupiter that,

The Sun clarifies the truths and characteristics of the other planets it touches, so Strength, therefore, strengthens the other Major Arcana cards in the spread, and magnifies their significance… The Sun and Jupiter communicate in a special configuration, so the benefits are intensified.

The solar arcana for this week is the King of Rods, which is also ruled by Leo and whose power of expression is magnified by (8) Strength appearing under the auspices of Mercury (Wednesday). Today’s is therefore a most auspicious arcana for this week.

Why do I have the power and ability to undertake and complete all my summer holiday goals?