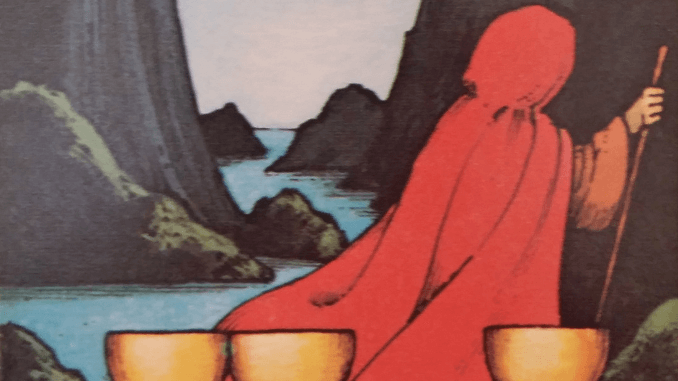 The Eight of Cups is ruled by Saturn in Pisces and today, being Tuesday, we focus on Mars, which is currently in Libra, where its energy is at its weakest. As it happens, later this week Mars begins to sextile Saturn which offers a synergy between the short term priorities of Mars and the long term focus of Saturn. That in turn suggests that we start to focus on our priorities for the coming year even as we work to get any remaining loose ends of 2019 tied up.

With the Moon still in expressive and playful Leo, and entering a fiery grand trine with Mars and Neptune, we may be able to tap into some inspiration in the midst of the Saturnine self-absorption of the Eight of Cups. In the Eight of Cups our hermetic pilgrim is cloaked in red, which suggests that he walks his path with passion. Our pilgrim is known as the Lord of Abandoned Success; he is willing to leave the golden cups behind, to let go and to move on; he may have found success but what is success without passion? What if success in one area of life has led to aridity in another? The cups may be plentiful, but they may also be empty. We might therefore contemplate letting go of whatever it was that manifested in yesterday’s Three of Pentacles Reversed as we prepare to move on into a new decade seeking goals that are in concord with our passion.