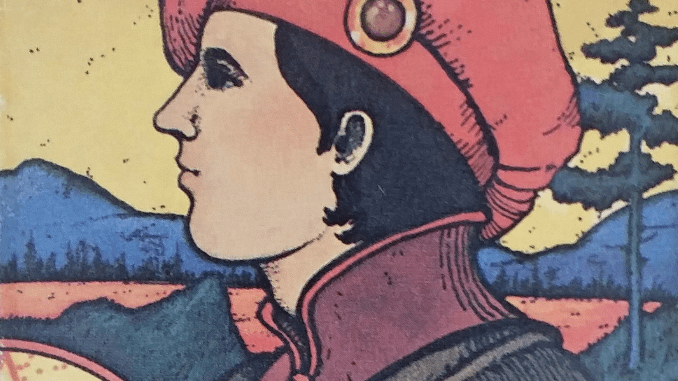 We are taught by Saint Paul that the first man, our Adamic nature, is “of the earth, earthy.” The Page of Pentacles is the very essence of “earthy earth” as both Pages and Pentacles partake of that element. Also, Pages are symbolic of the first stages of human development, which is at home in the things of the earth, or which is only just beginning to sprout forth and reach out for things beyond.

The Page of Pentacles wears a red hat which is again suggestive of his passionate Adamic nature. The feather in the Morgan Greer depiction suggests that there is also an airy quality to this most earthy of arcana, which reminds us that Adamic man is not only earthy, but formed of the breath of God:

And the Lord God formed man of the dust of the ground, and breathed into his nostrils the breath of life; and man became a living soul.

This Adam is made, according to the first chapter of Genesis, in the image and after the likeness of God. What this implies is beautifully expressed in a Qabalistic reading of the text in The Cipher of Genesis by Carlo Suarès:

“Adam” is Aleph immersed in blood, but this blood is not “all-absorbing”; it can become “cosmically fruitful”, which means that the human body can come to radiate cosmic energy. The scheme for man (Adam) is Aleph (1), Dallet (4), Mem (40 or 600). The fact that Mem final can be 40 (i.e. resistance) and can leap to 600 (i.e. cosmic fertility) indicates the vast range of possibilities in man. The true vocation of man is the transfiguration of 40 into 600.

In our quotidian lives we may aspire to the cosmic fertility of (21) The World by opening ourselves to creative spontaneity; the first step is to adopt the passionate curiosity of the Page of Pentacles. Let us hear what our latter day Adam has to say about that:

The Page of Pentacles on Maundy Thursday

Falling, as this arcana does on Maundy Thursday we may wonder if the Page of Pentacles is present at a Maundy Thursday Eucharist, especially as the Morgan Greer version suggests the elements of the bread (in the form of a eucharistic waver) before him and the wine flowing as a river of blood in the background.

If so, is it not likely that our Page of Pentacles will enter into a reverie upon the eucharistic mysteries?

For my part, today was the busiest and most lucrative teaching day of the year so far. I had four 90 minute classes in three different suburbs of the city of Hiroshima where I live, work and have my being. That alone gave me plenty of opportunities to practise “creative spontenaeity” as I engaged with many different students through the day.

The two classes in the middle of the day were at a women’s college. In those classes I invoked the Page of Pentacles by inviting the students to engage in some “creative spontaneity” of their own. I showed them how to access to all the recorded materials of the course book on their smart phones. That enabled the students to use their phones to listen to the recordings of the class topics at their own pace, creating a lively babble as multiple versions of the dialogues were being played on various devices out of sync with each other.

A Passionate Curiosity for Chess!

Also, in the mid afternoon I was able to spend a fruitful hour in the college library between the two classes. When I have time I study chess with “passionate curiosity” and when I have time I also publish some Easy Chess Tips on another blog. Anyway, this afternoon, motivated by the subtle influence of the Page of Pentacles, I went through some variations of “unusual early moves” in the French Defence. 🙂