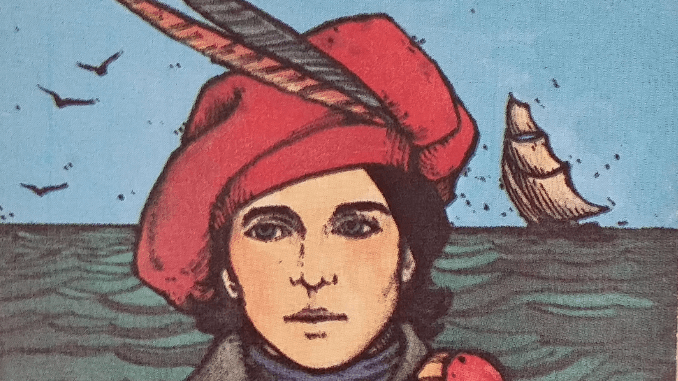 Here we see that our friend the Two of Pentacles (who we met in yesterday’s blog post as the Page of Pentacles) has become a man of the world, a man of affairs; still very much open to what life has to offer, close to the Fool and too fresh to be a “Worldly Wiseman.” The 2 of Pentacles is as willing to “cast his bread upon the waters” as his is to “do business in great waters.” His immediate future is touchingly shown forth in the words of Coverdale’s translation of the Psalm,

They that go down to the sea in ships: and occupy their business in great waters:

These men see the works of the Lord: and his wonders in the deep.

For at his word the stormy wind ariseth: which lifteth up the waves thereof.

They are carried up to the heaven, and down again to the deep: their soul melteth away because of the trouble.

They reel to and fro, and stagger like a drunken man: and are at their wits end.

So when they cry unto the Lord in their trouble: he delivereth them out of their distress.

For he maketh the storm to cease: so that the waves thereof are still.

Then are they glad, because they are at rest: and so he bringeth them unto the haven where they would be.

Both male and female became living souls by the breath of God in chapter one of Genesis, which points to their fully developed potential at the summit of creation, that is, the fully realized Adamic nature which struggles to realize itself in each of us.

However, in the second chapter three we see the earthy nature of Adam plunged into the great water of the unconscious where he will encounter his spouse, as yet not manifest in the 2 of Pentacles and not named as “Eve” until after the expulsion from Eden. Until then, she is Isha (Woman). According to Carlo Suares in The Cipher of Genesis Isha suggests the feminine form of cosmic fire (Aleph-Sheen = fire) endowed with life (Hay = life) but no existence as such, whereas Adam, the “Man,” or Eesh (Aleph-Yod-Sheen), has existence (Yod = existence) but until Isha manifests, he is not yet fully alive.

The 2 of Pentacles on Good Friday

Those are just the beginnings of the esoteric mysteries of Genesis in relation to the 2 of Pentacles. At the exoteric level, that of public worship, the oscillation suggested by the 2 of Pentacles is that between the Old and the New Adam, as preached in a Homily of Archbishop Leo Cushley of St Andrews & Edinburgh this year.

The 2 of Pentacles: Coping with the Chaos of Daily Life

As far as our daily affairs are concerned, the 2 of Pentacles invites us to adopt a spirit of flexibility and good humour, as our man Elliot Adam explains: