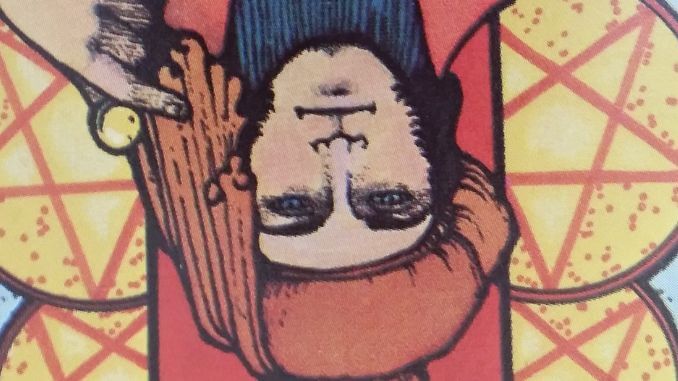 The Six of Pentacles is ruled by the Moon exalted in Taurus. Today the Full Moon is conjunct Chiron in sidereal Pisces, opposite the Sun in sidereal Virgo. Meanwhile, we have Mars stalling in Taurus. What are we to make of these locations when the Six of Pentacles is Reversed, especially as the Sunday arcana sets the theme for the coming week, the energy in which we live, move and have our being out in the light of the world?

The Six of Pentacles Upright is all about how we allocate our resources, whether that is literally in distributing alms (or making micro loans on Kiva for example), or in managing our own resources in our material and commercial life, or how we manage our inner (lunar) resources in relation to the material world.

With the full moon reflecting the light of the sun we seek to find ways to balance the practical earthy energy of Virgo with the receptive, contemplative and flowing watery energy of Pisces.

With Mars in Taurus squaring up to Neptune we may have some turbulence in seeking to align our drives with our more soulful side although Mars is slowing down and Taurus also has a calming or dampening effect on the fiery urges of Mars.

The Six of Pentacles Reversed

In this context the Six of Pentacles Reversed accentuates the passive aspects of the planetary alignments, that is the Moon in Pisces and the dampening effect of Taurus.

Yet this is our solar card, so it suggest that this week the practical efforts of Virgo should be channelled into personal projects that are ongoing rather than into anything new. Do not commit any fresh resources to new projects outside of the family domain. Take a more defensive stand in the allocation of your resources. Note that there is only one coin in the merchant’s hand. One coin and three hands. The coin should not leave his hand when the arcana is reversed.

Considering the commercial aspects of this arcana it would also be wise to keep an eye on Mercury. Keep in mind too that we are still in the post-retrograde shadow of Mercury in Virgo which doesn’t end until 16th October. (See my post of Wednesday 21st September for some insight into Mercury retrograde at this time.) I feel that this energy has been with us since the tenth Sunday after Trinity which was just before the pre-retrograde shadow of Mercury began, when I drew the Ace of Swords (Mercury in Libra).

Using The I-Ching For Further Clarification

I felt the reversed arcana required some further clarification and that the i-Ching would be the ideal medium for that purpose. The i-Ching is highly sensitive to energy flows and especially to the negative side. Reversals and retrogrades require caution and care, especially when contemplating the Sunday arcana, which sets the theme for the coming week.

I used the i-Ching cards and yin/yang coins by Agmüller and the first hexagram I threw was 37, Chia Jen (family man). The nuclear trigrams transformed into 63, Chi Chi (after completion).

Note how “harmony through co-operation” can relate to the equitable distribution of resources suggested by the Six of Pentacles Upright, but that here it is restricted to the “family,” with a mercurial focus on words, but words kept in order to maintain consistency with “the truth of things,” guard against the eloquent subtleties of the trickster. This week, when engaging in the commerce of language, do so with care. No false promises or verbal commitments you cannot or do not wish to keep to. Do not be seduced. And do not say what you do not mean simply to please others.

The nuclear trigrams transmute into “chi chi” which is named “already done” – the ford has been crossed – and yet the reading is focused on guarding against disorder to come, very much in accord with the negative connotations of our earlier reading.

So there you have it, the i-Ching nicely throws some light and perspective onto the situation and the energy flow and corroborates my sense that this week our solar energy is best channelled by NOT commiting one’s resources to anything outside of “the family” howsoever you construe it.