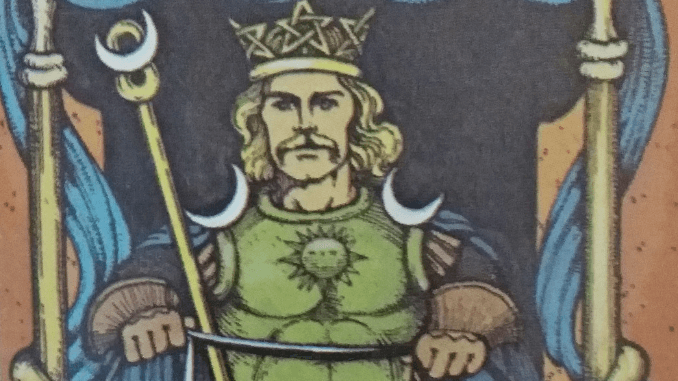 The (7) Chariot occupies the seventh Sephirah of the Kabbalistic Tree of Life, where today’s planet, Saturn (Binah, or Understanding) influences Mars (Geburah, or Severity). The week began with two lower arcana sevens, the Seven of Cups and the Seven of Swords, suggesting a degree of instability in our quotidian affairs. With the (7) Chariot closing out the week in which it was the the only Upper arcana to appear, and adding emphasis to the earlier sevens, stabilizing them in the higher plane and bringing a sense of perspective to an eventful week.

The (7) Chariot is governed by Cancer, and today it seems to be calling us to retreat within our armour, as it were, and reconnect with our spiritual source. Today it may well do us good to tap into some of Saturn’s melancholy, perhaps by reading a suitably tragic novel, but choose carefully so as to avoid too much Saturnian dryness; stay close to the Moon by ensuring your reading matter has some feminine sentiment.

In my case, today I have been listening to an Audible edition of Uncle Tom’s Cabin which combines plenty of Saturn’s melancholia with the watery sentimentality of the Moon and takes us, through Tom’s trials, suffering and death, and his influence on others, deep into the realms of the spirit. Harriet Beecher Stowe intended Tom to be a noble hero in the image of Christ, which is one way to look upon the figure who rides the (7) Chariot.