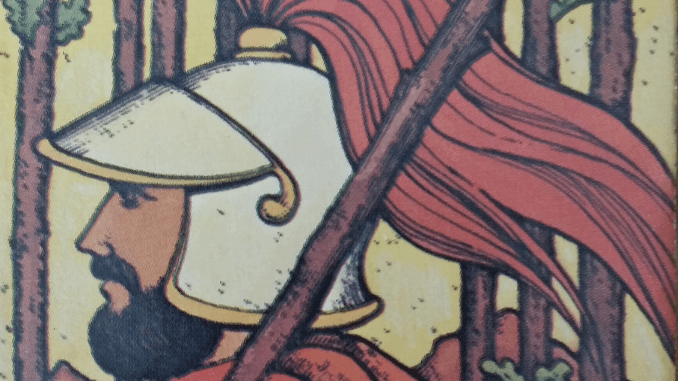 Early this morning I had an unsettling dream in which a row of beautiful young women were approaching me at walking pace through trees or brush which they were pushing aside as they approached. And as they approached I had a sense of foreboding and fear, but I woke up as they came up to me, and yet I wanted to re-enter the dream as the unease subsided; it was as if they had integrated themselves into my being. The moon is in its waxing crescent phase and it was as if Diana of the crescent moon and of the grove, had sent her nymphs in my direction.

Here in today’s arcana, the 9 of Rods we see a knight ready to defend his position behind a screen of rods or wands which I associate with the brush that screened the approach of the nymphs in my dream.

I have been looking at some other renderings of the 9 of Rods and have found quite a few designs that suggest that there is a connection between the arcana and my dream content.

Here, for example, is the 9 of Wands in the Arcus Arcanum Tarot showing a woman with a forest behind her from which she may have emerged…

And here, from the art nouveau Tarot Mucha deck, a woman who may have stepped through the screen of rods…

The 9 of Fire message suggests that one has nothing to fear from the approaching female figures, and that in fact they are indeed parts of oneself, aspects of one’s creativity which are to be accepted and believed in and protected.

9 of Rods in Context

If we keep in mind that the two planets visible in tonight’s night sky, Saturn and Jupiter, are both in retrograde, and the solar light of the Trinity season is diminished by the overcast weather (here in Hiroshima at least, as we pass through the rainy season) that contributes to the leaden Saturnine mood of the moment, then the fiery 9 of Rods offers a fiery counter to the dullness of the day and is a timely invitation to review our accomplishments to gain or renew a sense of pride in our achievements and to understand that we have the potential to achieve much more, as revealed in the Ace of Pentacles with which the week began, and the fulness of the (3) Empress who presides over it.

When you have a few minutes to spare, I suggest that you do the same so as to arm yourself against melancholia and self-reproach while Saturn is in retrograde and visible in the heavens.