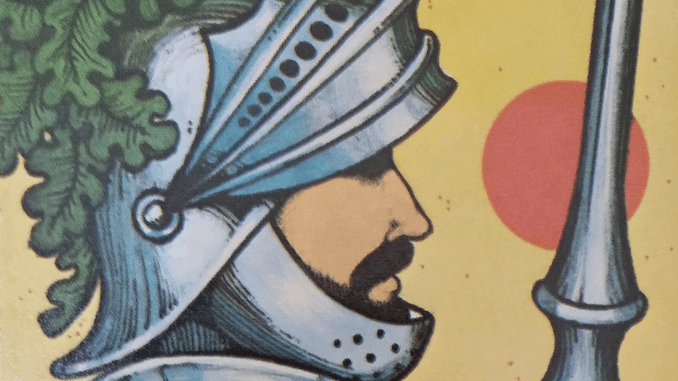 It is good to see our well-grounded Knight of Pentacles with his fiery solar spirit standing guard on our behalf after the week began with the 10 of Swords. The Knight of Pentacles guards the boundaries of our domain and the key point here is that he does not sally forth on ill-conceived crusades or fight battles other than his own (that is, in defence of his liege lord).

That is important because we live in contentious times where, thanks to the pervasiveness of social media, everybody’s business seems to become public property and it is open season to express instant, strong and often hostile opinions about all sorts of things that are not immediately related to our own everyday affairs.

Indeed, today’s reading in The Daily Stoic begins with a quotation by Epictetus which is on point and offers us a way to turn those ten swords into ploughshares:

“The beautiful and good person neither fights with anyone nor, as much as they are able, permits others to fight…this is the meaning of getting an education – learning what is your own affair and what is not.”

The moral which Ryan Holiday draws from Epictetus is this:

The next time you face a political dispute or personal disagreement, ask yourself: Is there any reason to fight about this? Is arguing really going to help solve anything? Would an educated or wise person really be as quarrelsome as you might initially be inclined to be? Or would they take a breath, relax, and resist the temptation for conflict? Just think of what you could accomplish – and how much better you would feel – if you could conquer the need to fight and win every tiny little thing.