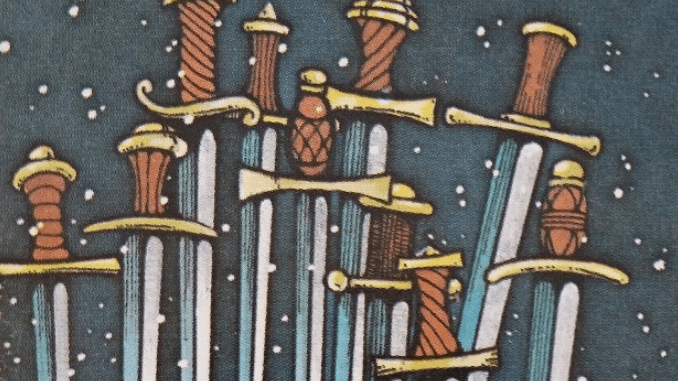 The Death of Caesar

For my part, I was preoccupied in my own mind with the death of Julius Caesar as it was the topic of a class I gave on Tuesday which looked in detail at Anthony’s “Friends, Romans, Countrymen” speech to the plebs in Act 3, Scene 2 of Shakespeare’s play. Caesar was stabbed 23 times by the senatorial conspirators, but although the murder was successfully carried out, the conspiracy failed in its larger aim of restoring the Republic; indeed, it led to civil war and the victory of Augustus Caesar as Rome’s first emperor, the opposite of what the conspirators wanted.

One way to read the 10 of Swords is to see the swords as our negative thoughts, or fears which “kill us” by preventing us from taking action. However, in Caesar’s case, he ignored the omens and acted in spite the signs and the fears of his wife and supporters, and walked straight into the trap. In doing so, Caesar was acting in accordance with his self-image and the heroic attitude to mortality expressed in his speech in Shakespeare’s play:

Cowards die many times before their deaths;
The valiant never taste of death but once.
Of all the wonders that I yet have heard.
It seems to me most strange that men should fear;
Seeing that death, a necessary end,
Will come when it will come.

It would be more accurate to say that Caesar was lured into leaving his home on the Ides of March by the words of a false friend who was sent by the conspirators for that purpose. Though death is indeed “a necessary end,” we should guard against killing ourselves too soon with words that are “false friends” to us, whether they come from others of from our inner voice. Such thoughts are traitors, breeding doubts that cause us to act against our own interest, or to desist from acting to our benefit:

Our doubts are traitors,
And make us lose the good we oft might win,
By fearing to attempt.