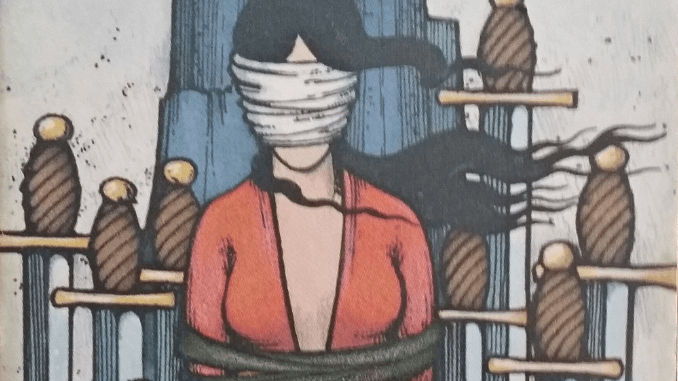 We greet the New Moon today with the Eight of Swords, another arcana that features a body of water. Here, we note that Luna’s face is concealed and hidden from us, just as she herself, lacking any Solar light is effectively blind as the moon is concealed from the sun by the great bulk of the earth, like the castle that looms behind the woman in the Morgan Greer rendering.

If, as is often said, the woman has been left on the beach at low tide to be drowned when the tide comes in, it is especially significant that she be there during the New Moon, as it is in the New Moon and Full Moon stages of the lunar cycle that high tides are at their highest.

Saint George and the Dragon

Another possible source for the iconography of the arcana is the legend of Saint George (which resembles the earlier Greek myth of Perseus and Anromeda). If so, then the body of water between the maiden and the castle is the lake in which the dragon dwells. It will be remembered that the lot fell to the King’s daughter to be offered to up to the dragon of the lake. When the dragon emerges, Saint George appears on his charger, makes the sign of the cross, and brings the dragon to bay and tames it by collaring it with the princess’s girdle, which she removes from her waist and hands to the saint. Thus, the princess herself participates in the taming of the dragon in cooperation with Saint George.

Indeed, Saint George, his charger, and the dragon may be seen as aspects of the woman, and all four as aspects of ourselves. Thus, when we find ourselves vulnerable and seemingly caught in the midst of our fears (the eight swords, four on either side, symbolizing a state of stasis), especially the shadows from the depths of the past that generate our self-destructive drives, it is by confronting them from a higher perspective (the sign of the cross) from which flows the divine energy that imbues the Saint with his courage and power (symbolised by the white horse) to confront, tame and ultimately to integrate our lower drives (by placing the maiden’s girdle around the dragon’s neck).