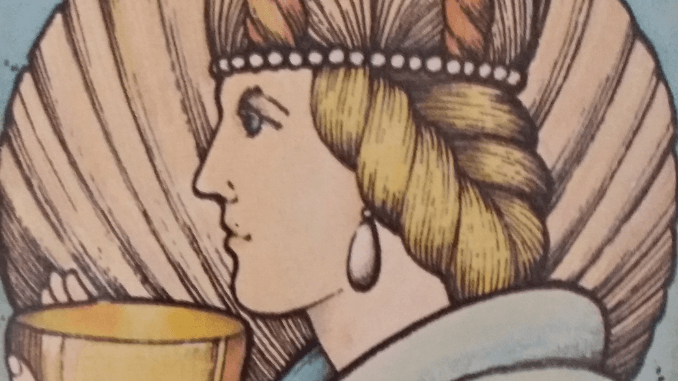 After the dry, Apollonian heat of the first half of this week, with the Ace of Swords in the Sun, the Eight of Swords, and the Queen of Swords in Mars the advent of the Queen of Cups in Venus (the goddess to whom Fridays are dedicated) brings some welcome relief to the soul. Not that this has been an ill-favoured week. Far from it. However, the mental faculties have been put to work in no uncertain terms.

Sidereal Venus is in Aquarius the Water Bearer, which emphasises the relationship between the airy element (Aquarius) and the watery element (the Water Bearer). Venus is also about to sextile Jupiter which offers an opening to enjoy our relationships and to take pleasure in the simple life, adding support, that is, to yesterday’s Ten of Pentacles in Jupiter.

A Meditation Upon the Birth of Venus

Until today, this week has been dominated by the airy element of the suit of Swords, with the pure potential of the Ace, the clarity of the Queen, and the challenge presented by the Eight of Swords on Monday.

Although sharp and biting, I do not find this week’s Sword energy to be vicious or divisive. Indeed, with today’s manifestation of the Queen of Cups (complete with scallop shells in the Morgan Greer illustration) the relationship between the airy and watery arcana this week is nicely illustrated by Botticelli’s Birth of Venus. In that painting, do we not see our Queen of Cups in the form of Venus blown by the airy elements across the sea of the subconscious to the cyprian shore, which is the earthy element represented by yesterday’s Ten of Pentacles?

When she steps ashore, Venus is greeted by a goddess of the seasons (one of the horae, a daughter of Zeus – Jupiter to the Romans) in the white robe of a priestess of Jupiter, on whose day the Ten of Pentacles appeared.

The Influence of Saturn

I suggested that this week’s Sword energy was sharp rather than vicious, but the back story of the Birth of Venus tells of the castration of Uranus by his son Chronos, or Saturn.

Indeed, a saturnine spirit has been lurking throughout the week. As I mentioned on Wednesday in relation to the Nine of Cups Reversed, Saturn has been occupying the eighth house of death along with the balsamic Moon.

If we look again at the Birth of Venus, the bullrushes in the bottom left of the picture are phallic reminders of what it was that Saturn severed; the overcast sky, which until now I had interpreted as part of the moisture of Venus, suddenly takes on a leaden and saturnine hue. The older name for Saturn is Chronos, which reminds us that Saturn is the God of Time who devours his own children, which again underlines the lesson we drew out of Wednesday’s arcana, the Nine of Cups Reversed, with the help of the intellectual energies of the Ace and Queen of Swords.

Today, therefore, the “birth of Venus” through the manifestation of the Queen of Cups is a most welcome development and we should not hesitate to dress ourselves in the white garments of Jupiter and the red robe of Venus to offset the dryness of Saturn.

In my case, I find that I can maintain a jovial spirit through much of the teaching work that I do here in Japan. Tonight, back in my own room, in cheerful solitude, I foster a ruby red, moist, venusian spirit by indulging myself in a few glasses of red wine.