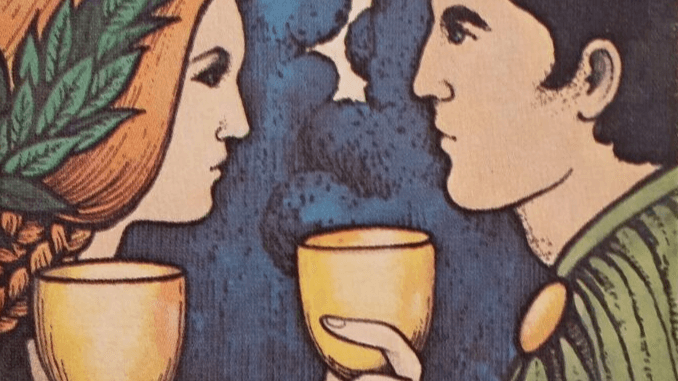 Well, after all I have said about Venus and Saturn this week, it seems that, in drawing the Two of Cups on this day dedicated to Saturn, we have a timely “conjunction” between the two in the Tarot cards, if not in the heavens. However, if we check the sidereal location of Saturn today, we find that he is transiting Sagittarius, which is significant because Saturn seeks to bring definition to Sagittarius’ expansive vision, and this feeds into observations we made in relation to the Nine of Cups Reversed and the other planets that were transiting Sagittarius on that day, which is the day around which much of this week’s reading has revolved. Saturn in Sagittarius challenges us to define where our treasure is, as the scripture puts it:

For where your treasure is, there will your heart be also

Venus, who has dominated the latter part of the week, bringing refreshment rather than inundation, has taken up the challenge posed by the Nine of Cups Reversed, and is now able to look Saturn in the eye and drink a toast with him. Remember, Saturn, though leaden, heavy, grey, domineering and restrictive, when persevered with, with the aid of balancing forces such as Venus, Jupiter or the solar Apollo, can be a source of “treasure” as the god who presided over the Golden Age after the castration and usurpation of Uranus.

As the two figures share a drink and gaze into each other’s eyes, we may suddenly see in them the governor of the feast at the wedding in Cana and Mary the mother of Christ sharing a moment when they both realize that the water has been transmuted into the finest red wine that they have ever tasted. In this way, Saturn, the father of time, who we meet at the end of the week, takes us back to where we began on the Second Sunday after the Epiphany.

The first half of the week was dominated by dynamic Sword energy which was “grounded” by the earthy Ten of Pentacles and balanced by the watery Cups in the last part of the week, especially on Friday and Saturday over which Venus powerfully asserted her dominion and balancing the clarity of the Queen of Cups with the deep emotional intelligence of the Queen of Cups. Both queens may be said to have provided responses to the questions which were raised first by the Eight of Swords and then by the arcana around which the reading of the week evolved, the Nine of Cups Reversed.

The theme of the week has been mainly focused on understanding what it is that one truly values in this life and having the heart and intelligence to pursue it, just as the Magi followed their star; in that way, the alchemical transmutation of water into wine, the thematic allegory of the Second Week after the Epiphany, may be manifested in our own lives also.