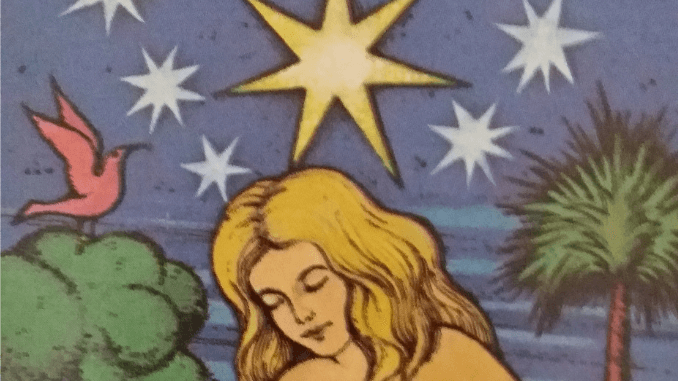 While the 10 of Pentacles is the arcana of prosperity in our worldly affairs, the (17) Star is the arcana of flourishing in the psychic realm. As such, the maiden pours the waters of life back into the water and onto the earth, blessing both the spiritual and material planes with abundance.

In the plays of Shakespeare, especially the early comedies and the late romances, you will often find a male character who has to undergo some kind of trial in the material world before being restored both to his real or former status and reuniting with his soul, which is symbolized by a female character; think for example of Ferdinand in the Tempest, who is forced to haul wood – like our man in the 10 of Rods – before being restored to his true worldly status – 10 of Pentacles – and marrying Miranda, the (17) Star of the play.