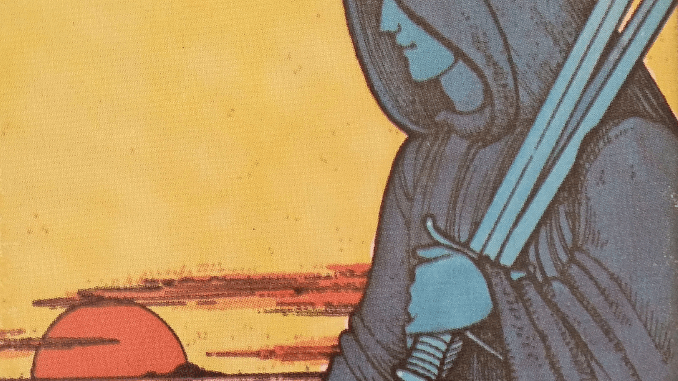 The Five of Swords is ruled by Venus in Aquarius, while the Sephirah of Geburah, where this arcana is placed, is the pillar of severity and more akin to Mars. Thus the pacific tendency of the planetary rulership is belied by the Martial quality of the suit of swords,

Today, Venus and Mars happen to be in trine, so the opposition of martial aggression and Venutian tact and receptivity are less pronounced and engaged in a more harmonious interplay at this time.

Mars continues in Pisces, suggesting that, in non-essentials at least, you simply “go with the flow.” Mars is also square with Saturn, which may test your perseverance and discipline in the things that matter.

Saturn is station direct, so just as the cloaked figure is picking up the discared swords, now is an opportune moment to think back to what you were more serious about a few months ago and see if you can revive those projects and implement more discipline and perseverance in pursuing them.

Why am I so adept at maintaining a cool head and turning any situation to my benefit?