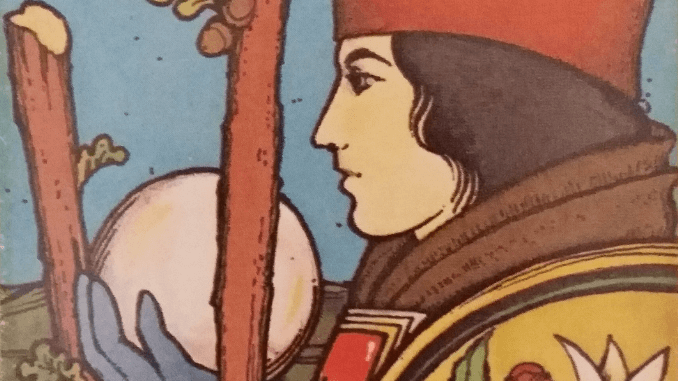 This is the third day a card from the fiery suit of Rods has come up for us. Last week concluded with some radical new thinking after a period of brainstorming and introspection. New ideas often generate intense excitement, which we saw manifested in Sunday’s Knight of Rods. However, Monday took that fiery energy and placed it back into the context of what our actions have achieved so far with the 9 of Rods.

Since I began this blog on Ash Wednesday 2019, the 9 of Rods has appeared three times, and every time it has been on a Monday morning with a “get back to work” feeling about it. Now in my case, I have built up my freelance teaching business to the point where I have a lot of work during this time of the year, and have already agreed to some contracts to carry me through the long August-September holiday season.

I realized yesterday that my “new idea” of a trip to Fiji in September clashes with a new commitment to join a team of teachers in an intensive English language course for the local police force during August and September.

So now I have a choice…

However, the choice is not whether to cancel my teaching commitments and go Fiji in September, but whether or not to go at all during the summer, or to postpone the trip.

What choices that, like the Knight of Rods, you feel passionate about do you need to make this week? Whatever they are, think about what you have achieved so far (9 of Rods) and do not undermine your pride in those achievements by making the wrong choice; remember also that this is the week of the (1) Magician in the Season of (20) Judgement so be ye doers of the Word, not hearers only, and not doers of that which is not in accordance with the Word.