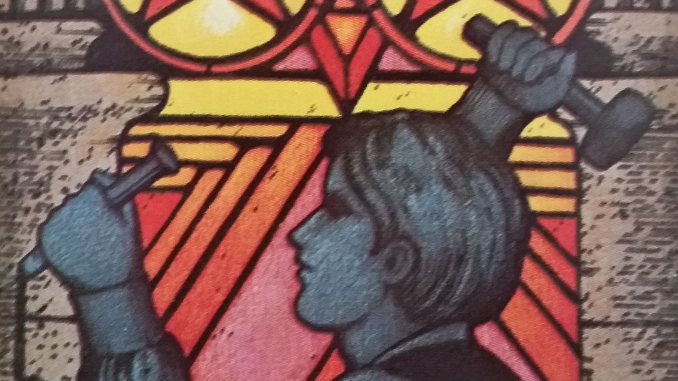 Today sees the last New Moon of the year, actually, the last of the whole decade, and with it a solar eclipse. The solar eclipse takes place at the south node and is associated with opportunities that emerge from what has gone before. As it is the Moon which eclipses the Sun, your exoteric light – your energy and presence in the world – is obscured by the Moon, which informs your esoteric, emotional and spiritual being.

In addition, the Sun and Moon conjunct Jupiter, who rules expansive Sagittarius, the sidereal constellation in which today’s solar eclipse occurs. This is therefore an excellent opportunity to turn within and meditate upon your emotional and spiritual condition and on what you seek to expand and grow in the coming year and decade. If you are celebrating Christmas with friends and family, try to set aside some time to yourself today and over the next few days if at all possible, in which to turn within and reflect.

Today’s arcana, the Three of Pentacles is all about bringing to realization in the material world the plans and blueprints that began in the realm of imagination. One story about this arcana is that the (0) Fool (our arcana for the liturgical season of Christmas) and the (5) Hierophant, the vision and the voice (as Ellen Goldberg puts it) that inform your work.

The Three of Pentacles is ruled by Mars in Capricorn, and Henry Ho suggests that this implies the work has already been completed. That concurs with the Moon’s crossing of the South Node at this time, where the focus is on what has manifested from the past. One might ask oneself therefore, how has the vision and the voice of the past decade worked out in one’s life hitherto? How does one feel about where that has led and about whatever has manifested through it? Then, working with the expansiveness of Jupiter in Sagittarius (together with the sidereal Sun for another three weeks or so), contemplate on how to expand the good and that which is in harmony with one’s inner spirit, and to relinquish the negative and that which is in opposition to it.

Practically speaking, today is the ideal time to be alone and to write in a journal or a notebook a review of the past decade and past year, and to evaluate it, preparatory to imagining, envisioning, and committing to your heart and to paper, your hope and vision for the next decade, and most specifically for the coming year.

A Meditation Upon Saint Stephen’s Day

As today happens to be the Feast of Stephen it is worth noting that the Three of Pentacles following directly on from yesterday’s Two of Pentacles, reminds us of the Word made Flesh.

It also reminds us that the vision and the voice that guide the mason in the building of the church may not always be well received by those who do not partake of the vision. For it is at the moment when Saint Stephen gives voice to his vision of Christ at the right hand of the Father in glory that he is taken and stoned to death.

Giving voice courageously to your vision may indeed come at a cost of ridicule and rejection, possibly worse; but there is honour in it too. Saint Stephen, as well as receiving an heavenly crown, is honoured in conjunction with Christmas as the first Christian martyr, and as an example of what joyful reception and courageous preaching of the Word may entail in this life. Are you ready and willing to follow your vision and bring it to life with courage and conviction, wheresoever it may lead you? Is that what you have been doing hitherto?