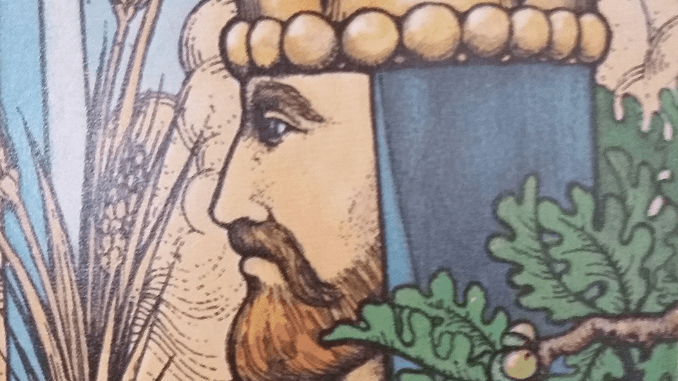 The King of Swords represents the height of practical wisdom, phronesis – the Greek word for prudence, which comes from word phren, which means “diaphram,” clearly linking the act of reasoning with that of the breath, or the element of air.

The King of Swords is a doubly “airy” arcana since both the Kings and the suit of Swords partake of that element. However, the airy quality of the King of Swords is much more deeply intellectual than the flightiness of other airy characters such as the Page or the Knight. Thus, the King of Swords keeps in check the airy exultation of the (6) Lovers in this sixth week of Trinity, bringing his wisdom to focus on that which matters most in his life.

This week sees the Old Moon empty herself out and the New Moon begin her cycle, so it is a good week for contemplation rather than action, a week for cleaning out the old and preparing for the new cycle. It is also a week that sees out the old month and prepares for the summer holidays of August, so there is the beginnings of a shift of focus and of mood. The King of Swords calls upon us to use our powers of cogitation to make clear and definite plans and to prepare thoroughly for the coming season.