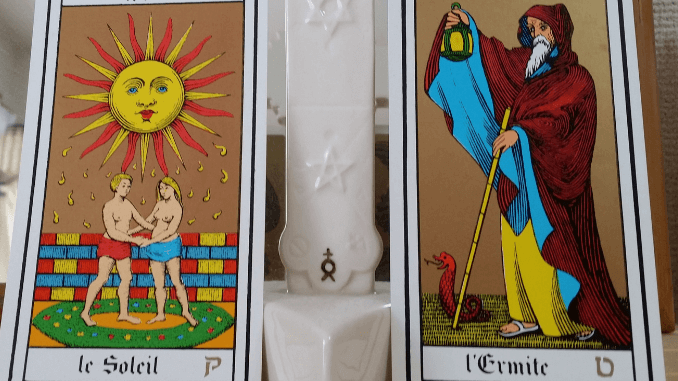 On arriving at the (9) Hermit’s cell on the ninth Sunday after Trinity, we are confronted with a perplexing parable, that of the Unjust Steward (Luke 16: 1-9) whose worldly ways seem to be in complete opposition to those of the solitary (9) Hermit. Yet it is through the arcana of the (9) Hermit that we may gain a clearer insight into the parable, for the ninth letter of the Hebrew alphabet, Tet ט, which first appears in the Bible in Genesis 1: 4, in the word “tev” which means “good.”

The Parable of the Unjust Steward

And he said also unto his disciples, There was a certain rich man, which had a steward; and the same was accused unto him that he had wasted his goods. 2 And he called him, and said unto him, How is it that I hear this of thee? give an account of thy stewardship; for thou mayest be no longer steward. 3 Then the steward said within himself, What shall I do? for my lord taketh away from me the stewardship: I cannot dig; to beg I am ashamed. 4 I am resolved what to do, that, when I am put out of the stewardship, they may receive me into their houses. 5 So he called every one of his lord’s debtors unto him, and said unto the first, How much owest thou unto my lord? 6 And he said, An hundred measures of oil. And he said unto him, Take thy bill, and sit down quickly, and write fifty. 7 Then said he to another, And how much owest thou? And he said, An hundred measures of wheat. And he said unto him, Take thy bill, and write fourscore. 8 And the lord commended the unjust steward, because he had done wisely: for the children of this world are in their generation wiser than the children of light. 9 And I say unto you, Make to yourselves friends of the mammon of unrighteousness; that, when ye fail, they may receive you into everlasting habitations.

The Form of a Serpent

However, the form of the letter itself suggests the form of the serpent, which we see also raised up upon the earth at the foot of the (9) Hermit as a symbol for the subtlety of worldly wisdom which is revealed by the light of his lantern while he himself remains concealed by his cloak and thus unseen by the serpent.

Now note that the (9) Hermit stays in touch with the earth through staff which he holds in his left hand. It is with this staff that he can control the serpent. Indeed, the serpent and the staff shall become one, like the staff of Asclepius or the rod of Moses. In The Tarot of the Magicians Oswald Wirth puts it like this:

The wise man prefers to cast a spell over the animal so that it twines itself round his stick as round the stick of Esculapius. It is in fact a question of vital currents which the miracle-maker picks up with a view to practising the medicine of the Initiated.

Oswald Wirth, The Tarot of the Magicians, p. 97

That is, we are to work in the world with the things of the world, to be attuned to their “vital currents” and thereby benefit from them by making them of benefit to others so that when those “vital currents” be they the flow of wealth or of healing power, or of physical health, or of influence, fail us, we shall have the goodwill of others to assist and comfort us. In this sense, the unjust steward meets the (9) Hermit in the alchemist’s laboratory, turning the base metal of this world into a golden legacy.

Grant to us, Lord, we beseech thee, the spirit to think and do always such things as be rightful; that we, who cannot do any thing that is good without thee, may by thee be enabled to live according to thy will; through Jesus Christ our Lord. Amen

Create in me a clean heart, O God; and renew a right spirit within me. Cast me not away from thy presence; and take not thy holy spirit from me. Restore unto me the joy of thy salvation; and uphold me with thy free spirit. Then will I teach transgressors thy ways; and sinners shall be converted unto thee.

Make to yourselves friends of the mammon of unrighteousness; that when ye fail, they may receive you into everlasting habitations.

I am the light of the world; and the way, the truth, and the life:
no man cometh unto the father but by me.