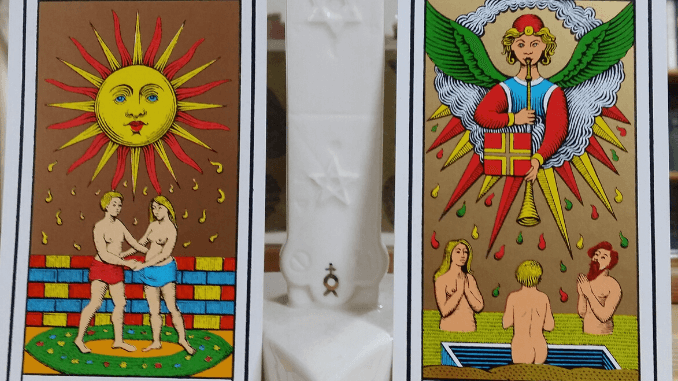 The Twentieth Sunday after Trinity is dedicated to the arcana of (20) Judgment which has at it’s heart the concept of “calling” or of being called. Today’s Gospel reading is all about the parable of the wedding feast and about those who were called, or invited to attend. What we discover is that at any moment many may be called but few are prepared to become the “chosen” ones who actually attend and are present at the feast.

The Calling of the (0) Fool

The (0) Fool receives his calling from the (1) Magus and passes through the upper arcana until he comes to his second calling at the arcana of (20) Judgment, where he emerges from the grave as one of the chosen ones who is now naked, stripped of his old rags and ready to be washed and clothed and prepared to enter the final arcana of the (21) World where he will complete his initiation into the mysteries of the Divine Sophia.

Prior to his initial calling by the (1) Magician, the (0) Fool was apt to say “Yes” to everything for good or ill without reflection, discrimination or forethought, unlike the wise men of this world who are notable naysayers. The (0) Fool can be found among the wayfarers on the highway of this life, both good and bad – for the (0) Fool will be found among all those who retain their connection with the vital energy of Life. And it is precisely because of his energetic affirmation of everything that he also says “Yes” when called by the (1) Magus, which is how it comes to be that both the good and the bad may indeed be called to and participate in the wedding feast.

The Initiation of the (0) Fool

The process of initiation which the (0) Fool has almost completed by the Twentieth Sunday after Trinity incarnates within him a new habit of affirmation; it is not that he ceases to say “Yes” to everything, but now, instead of his eternal yes being an affirmation of the material surface of things, of the shadows dancing across the wall of Plato’s cave, as it were, it is now a joyful affirmation of the Logos in all things. That is how it is that the (0) Fool can attain wisdom, redeeming the time, and rising in glory from the initiatory tomb at the sound of the trumpet of (20) Judgment.

O Almighty and most merciful God, of thy bountiful goodness keep us, we beseech thee, from all things that my hurt us; that we, being ready both in body and soul, may cheerfully accomplish those things that thou wouldest have done; through Jesus Christ our Lord. Amen.

Thy dead shall live, their bodies shall rise. O dwellers in the dust awake and sing for joy! For thy dew is a dew of light, and on the land of the shades thou wilt let it fall.

For many are called, but few are chosen.

I am the light of the world. The trumpet shall sound, and the dead shall be raised incorruptible.