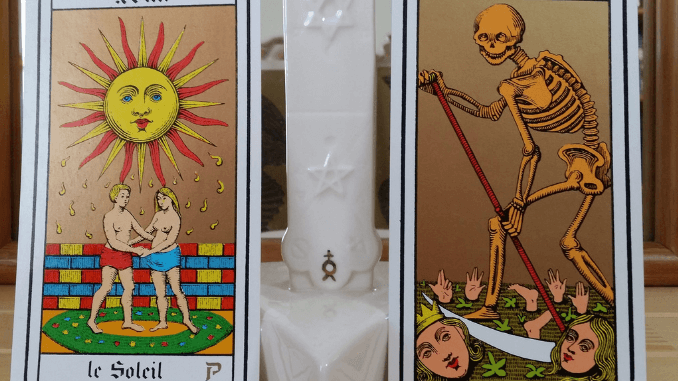 The Gospel reading for the Thirteenth Sunday after Trinity is from the tenth Chapter of Luke, the story of the Good Samaritan. It will be noted that the parable begins with the descent of “a certain man,” who is of course Everyman, from the hilltop City of Peace (Jerusalem) along the “way of blood” to the Dead Sea City of the Moon in the lowlands below. As he descends into the valley, as into the Valley of the Shadow of (13) Death, he is set upon by thieves, wounded, stripped and left “half-dead,” avoided by the priest and the levite, only to be saved from (13) Death by a despised foreigner, the Good Samaritan.

Almighty and merciful God, of whose only gift it cometh that thy faithful people do unto thee true and laudable service: Grant, we beseech thee that we may so faithfully serve thee in this life, that we fail not finally to attain thy heavenly promises; through the merits of Jesus Christ our Lord. Amen.

Yea, though I walk through the valley of the shadow of death I will fear no evil: for thou art with me; thy rod and thy staff they comfort me.

A certain man went down from Jerusalem to Jericho, and fell among thieves, which stripped him of his raiment, and wounded him, and departed, leaving him half-dead.

For to me to live is Christ, and to die is gain.

I am the light of the world; hear, o dry bones, the word of the Lord.