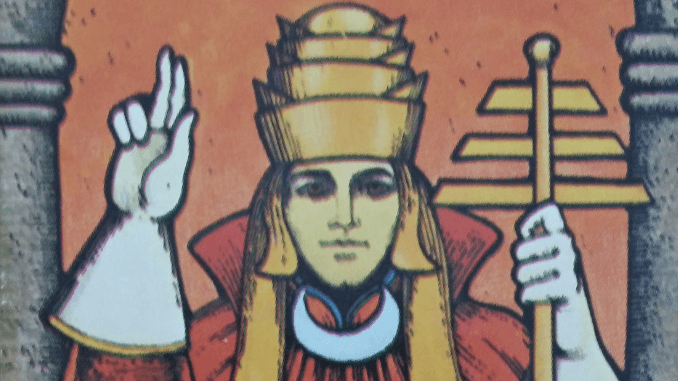 Naked came I out of my mother’s womb, and naked shall I return thither: the LORD gave, and the LORD hath taken away; blessed be the name of the LORD.

This week we saw the dancer dancing naked in the womb of the (21) World, followed by the blessing of the (5) Hierophant, which in turn was followed by (13) Death and today by the return of the (5) Hierophant in a second act of blessing. Here then, is the double movement of Divine, “giving” through the dance of the (21) World, and “taking away” through the dance of (13) Death, each of which is “blessed” by the Hierophant. Indeed, the (5) Hierophant himself sits between the two pillars of Solomon’s temple, Jachin and Boaz, which in the tarot tradition are typically white and black, representing the polar opposites that may be seen in the contrast between (21) World and (13) Death, yin and yang.