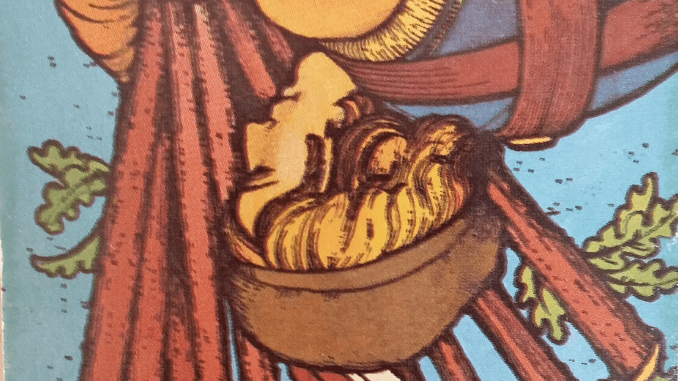 When the Ten of Wands appears reversed appearing in the wake of the cheerful sequence of cups may suggest the releasing or overturning of a toilsome burden in one’s life, or of infusing your work with joy, as Elliot Adam mentions in his video:

Mars in Virgo in Sextile with Jupiter

Today, being Tuesday, is dedicated to Mars and today Mars in Virgo is in sextile with Jupiter, which adds a positive and expansive note to the fiery energy of Mars, quite possibly therefore overturning what had hitherto been seen as burdens, responsibilities, duties and necessary tasks and turning them into passionate endeavours full of the joy that has infused our readings for the past few days. Virgo is an earthy sign focused on healthy improvement suggesting that the putting down of burdens is a process of completing rather than abandoning important tasks.

Today is also the Full Moon in Aries (according to sidereal astrology), which is ruled by Mars, so today the martian energy is most pronounced in a positive direction, giving us a strong sense of initiative and confidence, but balanced by Mercury retrograde in Libra so beware of having your confidence and joy as you release your burdens misunderstood as arrogance or indifference to the problems of others. For a more detailed look at the planets today see Athen’s video: