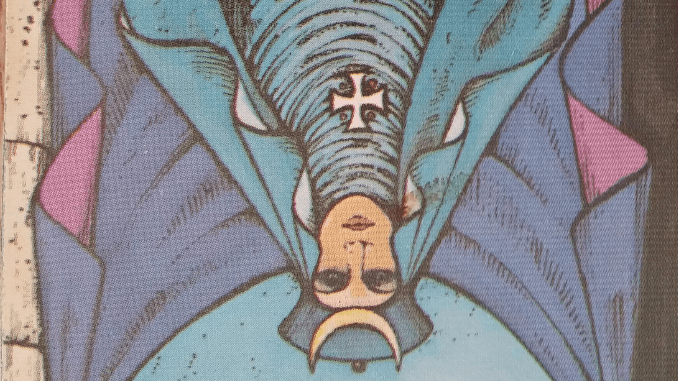 It is only now, as I come to write this blog, that I realize that last night, as I was sat on a bench by a river and under the crescent moon listening to a colleague of mine describe a stressful experience at another workplace I was emulating the blindfolded figure of the Two of Swords which was yesterday’s arcana. Later we went to an izakaya for a cheerful dinner and several more beers, then to a bar… and from there my colleague went home – it always surprises me how easily some fellows can disengage from an evening of revels – but I fell in with other company and visited a couple more bars, not getting home and to bed until seven thirty this morning.

Up at eleven, I drew the (2) High Priestess Reversed and then headed off to work in something of a daze to teach two classes at a women’s college, so very much in the presence of feminine energy of two sorts, the first class being relatively docile and the second being full of mischievous energy and keen on holding a Halloween party.

It was not until some time later that I found Marvina Meek’s excellent discussion of the High Priestess Reversed and found that it spoke to my state very well as one who had fallen back like Persephone into a nocturnal underworld, reenacting old ways of being and thinking (or not thinking – forgetful of the Queen of Swords who appeared on Tuesday):

I shall not be too hard on myself; indeed, although there was a tinge of regret, a feeling that it would have been better if I had been mindful enough to catch the last tram home, or even to have caught a taxi home when my colleague left, I nevertheless did not indulge in the incrimination of self-loathing. Rather, I took – I take – some pleasure in my resilient capacity to get through the day after a beery debauch and just three and a half hours sleep with equanimity, to party with my students, and to play chess for much of the evening – not well, it must be admitted, but well enough to win two out of three of the games I played!

I shall not be too hard on myself because it turns out that Mercury has gone stationary retrograde and has done so in my eleventh house, which is the house of friendship and last night I “made friends” with several groups of guys, from English rugby fans to Japanese musicians.

On the Influence of Pluto Retrograde in my Ascendant!

In researching for this blog post I came across some information about the influence of Pluto being retrograde in your ascendant, as it is in mine:

With Pluto R[etrograde], the influence is more psychological rather than expressing an external need to control the environment. As a child, the individual learned to pick up subtle cues from adults picking up good moods or bad moods, when to assert or when to step back. They make good psychologists or they do well in jobs where profiling others is important. Their powers of physical regeneration are phenomenal!