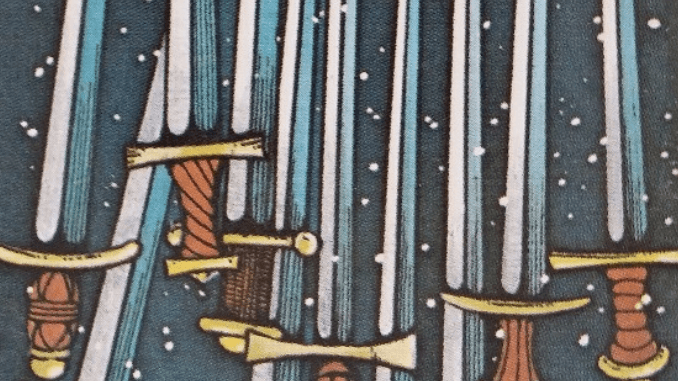 Shocking as it may be to see the Ten of Swords appear for a second day in a row, that it does so in reverse form suggests that the situation that I described in yesterday’s meditation will drag on with a slightly mitigated intensity, for some time, and that now is the time to turn around and face our fears of disease, death, loss and poverty.

That is where the Stoicism of Marcus Aurelius and Seneca can assist us. This morning’s reading from The Daily Stoic sets the mood:

Drama, combat, terror, numbness, and subservience – every day these things wipe out your sacred principles, whenever your mind entertains them uncritically or lets them slip in.

Note that it is not that we should not “entertain” those ideas, but that we should not do so “uncritically.” That is the mistake most people make; they allow themselves to be pierced by the swords of other people’s dramas, news reports, and other extraneous events, as well as by the trash talk of the voice in their minds.

I have just read a section of Antifragile by Nassim Nicholas Taleb, titled Stoicism’s Emotional Robustification and it seems pertinent to today’s arcana:

Seneca fathomed that possessions make us worry about downside, thus acting as a punishment as we depend on them. All downside, no upside. Even more: dependence on circumstances—rather, the emotions that arise from circumstances—induces a form of slavery. [my italics]

Seneca’s practical method to counter such fragility was to go through mental exercises to write off possessions, so when losses occurred he would not feel the sting—a way to wrest one’s freedom from circumstances.