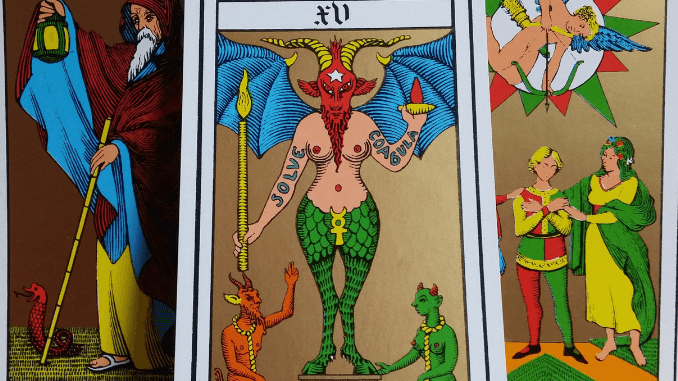 Ash Wednesday is the first day of Lent, the 40 day season that leads up to, and prepares us for, initiation into the Christian mysteries of Easter. The Hermit is the seasonal card as Lent is a season of fasting.

Lent commemorates the time when Jesus withdrew into the wilderness to fast and to be tempted by the devil and so The Devil card is displayed from Ash Wednesday until the end of the week. The Devil will reappear at the end of Lent on Easter Eve.

The Collect for Ash Wednesday

Almighty and everlasting God, who hatest nothing that thou has made, and dost forgive the sins of all them that are penitent: Create and make in us new and contrite hearts, that we worthily lamenting our sins, and acknowledging our wretchedness, may obtain of thee, the God of all mercy, perfect remission and forgiveness; through Jesus Christ our Lord. Amen.

There is a danger here that the ego merely reaffirms itself through a ritual of “sentimental guilt” and repentance, the hidden motivation of which is its own justification; nothing can be so right as acknowledging – and feeling, indeed, – that one was wrong, nothing so good as admitting to having been bad.

The pendulum will continue to swing between good and evil until the weight is raised to the fulcrum, the Centre above and beyond the opposites. For sentimental guilt by no means destroys egocentricity, being nothing other than the sensation of its wounded pride – a pride which it then labours to restore by acts of penitence and piety.

The Devil and The Hermit

This is the epitome of the “arcanum of counter inspiration,” the arcanum of The Devil and of,

…the creation of artificial beings and of the slavery into which the creator can fall – becoming a slave of his own creations.

Meditations on the Tarot

The Hermit reminds us that, while we may participate in the public rites and rituals of Shrove Tuesday and Ash Wednesday, of confession and the imposition of ashes, we do so from the wilderness, following the hermetic rule of silence.

How should we think of penitence, then? Think of it as a process of conversion, a process of metanoia emerging from calm self-reflection and self-awareness, of seeing the case as it is.

To sin is to have missed the mark in some specific way. In Greek drama it is the moment of hamartia – the committing of an error, caused by a false opinion.

The process of lamentation, if it is to be “worthily” done is not a matter of outward wailing and gnashing of teeth, but a process of looking into our hidden motives and patterns of self-deception, and acknowledging that they are wretchedly and self-destructive.

You might even spend some time in solitude writing down memories

Of all that you have done, and been; the shame

Of motives late revealed, and the awareness

Of things ill done and done to others’ harm…

The process may cause us to cry out at times in self-reproach. We may also need to go and apologise to somebody whom our actions have hurt and express remorse for what we have done, and here too, lamentation may be an appropriate expression of remorse.

The process, then should be seen as an opportunity for growth, not for self-loathing. This too is predicated by the opening portion of the collect for the day, that God hates nothing that he has made. Therefore if the living God that is within you places Love at the heart of your very being, you yourself should also reflect that love in loving yourself and then from yourself outward towards your neighbour. That is what it means to love others as ourselves. Lamentation then, practised with hermetic silence as far as the outer world is concerned, marks the beginning of the return towards divine Love and the care of the soul, which is the fruit of metanoia, of the “contrite hearts” of the collect.

The perfect remission and forgiveness which conclude the collect for Ash Wednesday remind us that, no matter what has been done, the present is ever new. We may continue to live through the consequences of hamartia but what we do here and now does not have to be a repetition of yesterday’s error.

We can help ourselves further by reflecting on how it is we want to live from now on, for, as Epictetus put it, in the Stoic idiom,

An important place to begin in philosophy is this: a clear perception of one’s own ruling principle.

In this way, we are longer chained to the arcanum of counter inspiration for now we are free to walk in newness of the spirit.

Rend your heart, and not your garments, and turn unto the Lord your God. Ye cannot serve God and mammon  Where charity and love are, there God is.