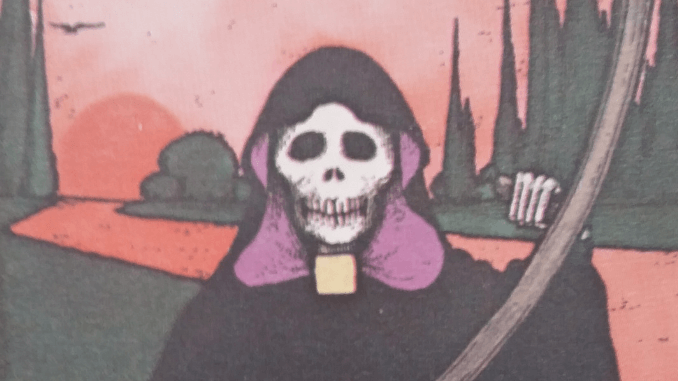 Today the Sun is square to Saturn and both Saturn and Pluto are approximately square to Mars, the ruler of Scorpio, the presiding constellation of (13) Death. Mars, Saturn and Pluto are all planets which may be associated with the arcana of (13) Death. This week we have seen the cloaked figure of the Five of Swords twice in a row, gathering up the fallen swords of the past, and now, immediately after them, the cloaked figure of (13) Death itself, suggesting that the process of the Five of Swords (and Ten of Pentacles), which began in the 16th week after Trinity, is now over and we take with us through this week the sense of the transience of all things and that, “marble too is water in the eye of Time.”

Over the last couple of weeks or so I have been reading through my diaries and feeling a new sense of gratitude for my past adventures, including the downs as well as the ups. With the advent of the arcana of (13) Death at the beginning of the new week, I felt that that process of recollecton and appreciation has run its course and that I should die to my past. So I read through the last of the diaries that I kept, back in the day, and have put them all back into the storage box from whence they came so as to clear the space for the new things of this week and this moment. The past is not nor is the future. Only in the now are we alive in this dispensation. Let us die then to all the rest that we may open ourselves to, and find new life in, this moment, here and now.

Why am I able to partake of and enjoy the things of this world without attachment to them?