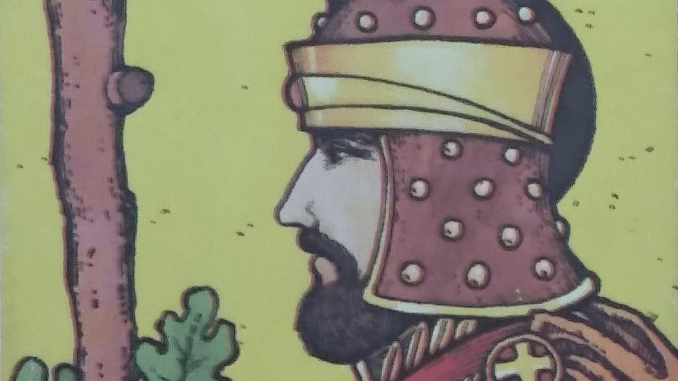 The King of Rods is the Lord of Magnanimity, ruled by Leo, a solar sign that gladdens our hearts on this Day of the Sun. Magnanimity itself is the ancient virtue of great-heartedness, or greatness of soul. Great-heartedness is the quality of being open to the light of the Divine Intellect and understands that it is the light of the one who declares,

I am the light of the world.

The King of Rods looks back and draws his inspiration from what has gone before. That is to say, he draws his wisdom, competence and authority from the experiences of the past. However, he does so in order to work constructively in the present and for the future, as is suggested by the fresh leaves sprouting on his wand. The King of Rods sits on a throne decorated with lions to emphasise his rulership of the element of fire, but his other familiar friend is the salamander, which reminds us that the King of Rods is an agent of change through the application of fire.

This affirmation, in the form of a question, as advocated by Noah St. John, is for the King of Rods when under the influence of the Sun:

Why am I able to inspire myself and others with magnanimous visions of harmony and beauty?