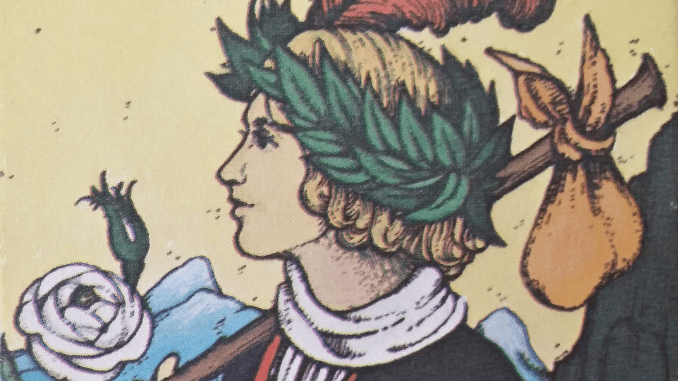 Who said that we “won’t get fooled again”? It seems that my meditation on folly was folly itself for it brought out the King of Swords to wage war against the (15) Devil and all his pomps.

Nevertheless, when the Fool crops up twice in a week, then I think we have no other recourse but to revert to some “whining poetry”:

I am two fools, I know,
For loving, and for saying so
In whining poetry;
But where’s that wiseman, that would not be I,
If she would not deny?
Then as th’ earth’s inward narrow crooked lanes
Do purge sea water’s fretful salt away,
I thought, if I could draw my pains
Through rhyme’s vexation, I should them allay.
Grief brought to numbers cannot be so fierce,
For he tames it, that fetters it in verse.

But when I have done so,
Some man, his art and voice to show,
Doth set and sing my pain;
And, by delighting many, frees again
Grief, which verse did restrain.
To love and grief tribute of verse belongs,
But not of such as pleases when ’tis read.
Both are increased by such songs,
For both their triumphs so are published,
And I, which was two fools, do so grow three;
Who are a little wise, the best fools be.