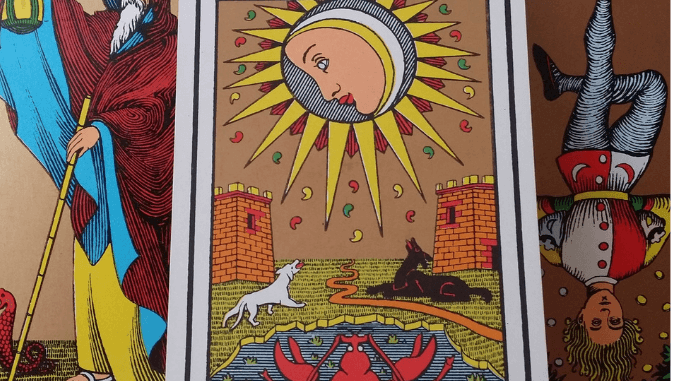 According to the Apostles Creed and the Athanasian Creed, after the death and burial he descended into Hell. According to tradition, Christ “harrows” Hell to release the souls of the just. In Duccio di Boninsegna’s painting of Christ harrowing Hell, he depicts Christ as trampling on the prostrate form of the (15) Devil.

The (15) Devil, who appears in his pomp on Ash Wednesday, marking the beginning of Lent and the temptation of Christ, reappears on Easter Even, but now reversed, to symbolize his overthrow as the resurrected Lord frees the faithful from limbo.

What is the perennial significance of the Harrowing of Hell? Alan Watts, in his chapter on The Passion in Myth and Ritual in Christianity writes,

The importance of the “harrowing of Hell” is that the power of the Incarnation is retroactive or, to put it in another way, timeless. The coming of Christ is not a truly historical event – a step in a temporal process which is effective only for those who follow. It is equally effective for those who came before, and thus the Descent into Hades is a feature of the Christ-story which particularly suggests the timeless and mythological character of the whole. From another point of view, the descent into the depths is almost invariably one of the great tasks of “the Hero with a Thousand Faces”, of the Christ in his many forms. Hades or Hell may here be understood as the Valley of the Shadow, the experience of impotence and despair in which “I” die and Christ comes to life. The descent is likewise a figure of the descent of consciousness into the unconscious, of the necessity of knowing one’s very depths.

It is in reference to the “Valley of the Shadow of Death” that the (18) Moon serves as the Arcana for Easter Even.

Grant, O Lord, that as we are baptized into the death of thy blessed Son our Saviour Jesus Christ, so by continual mortifying our corrupt affections we may be buried with him; and that through the grave, and gate of death, we may pass to our joyful resurrection: for his merits, who died, and was buried, and rose again for us, thy Son Jesus Christ our Lord. Amen

Rend your heart, and not your garments, and turn unto the Lord your God. Strength is made perfect in weakness. All things have their season, and in their times all things pass under heaven. Thou wilt not leave my soul in hell, neither let thy holy one to see corruption.