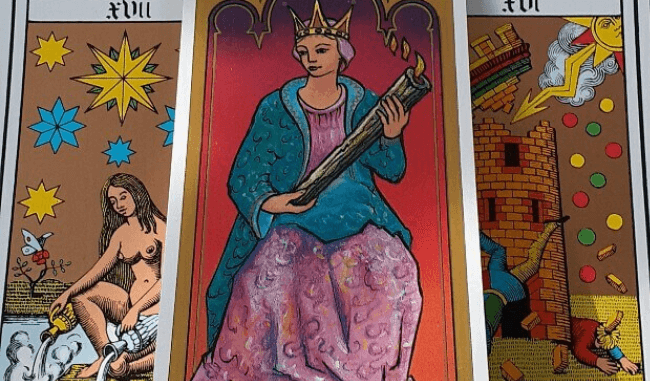 Candlemas is the day on which all the candles which will be used in the ceremonies of the church for the next year are blessed. It is also the commemoration of the Purification of the Virgin Mary, forty days after the birth of Christ, and the Presentation of Christ in the Temple in Jerusalem.

Candlemas and The Presentation of Christ are both purification rites that also mark the midway point between Christmas (or the Winter Solstice) and Spring (or Easter, or the Spring Equinox) in the during of the liturgical season of Epiphany.

We observe Candlemas by displaying the Queen of Wands alongside the (17) Star, which marks the liturgical season of Epiphany, and the arcana of whichever week of Epiphany in which Candlemas happens to occur, and we chant the Adorna Thalamum and recite the Nunc Dimittis.

Lord, now lettest thou thy servant depart in peace; according to thy word. For mine eyes have seen thy salvation; which thou hast prepared before the face of all peoples. To be a light to lighten the Gentiles; and to be the glory of thy people Israel.

Glory be to the Father, and to the Son, and to the Holy Ghost; As it was in the beginning, is now, and ever shall be, world without end. Amen.