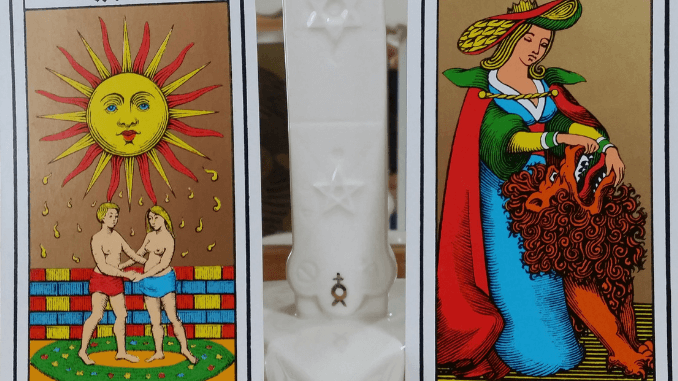 The eleventh week after Trinity is one of the most dynamic of the year. It usually occurs when the sidereal Sun is in Leo. The seasonal arcana for Trinity is the (19) Sun and the arcana for this week is (11) Strength, both of which are ruled by the Sun in Leo. Thus we have a triple alignment of Sun in Leo.

The theme of this week’s collect is the divine manifestation of strength through mercy, which is amply illustrated in the 11th arcana of the Tarot, and satisfactorily expressed in the words of Oswald Wirth in The Tarot of the Magicians on the topic of (11) Strength:

Supreme energy which no brutality can resist is represented in the Tarot by the aspect of a blond and graceful queen who without any apparent effort tames a furious lion whose jaws she is holding apart…. It is not physical strength, nor muscular, which arcana 11 is extolling. It is concerned with the exercise of feminine strength, much more irresistible in its gentleness and subtlety than any outburst of anger and brute force.

Oswald Wirth, The Tarot of the Magicians, p. 105

Later on in the same chapter, Oswald Wirth points out that the wise take into account the baser instincts of Ego and of the Devil, and harness them for their purposes. The woman in the eleventh arcana is a feminine manifestation of wisdom, whose name is Intelligence, and who enacts the masculine “Dorian programme” that is the subject of the first eleven cards of the Upper Arcana. I quote at length:

Egotism in all forms remains the Prince of this base world; the Wise man makes his decision and takes the Devil into account to force it, in spite of itself, to take part in the Great Work. Such is the teaching of arcana 11.

The feminine Magician who thus puts the masculine or dorian programme into practice is called Intelligence. She is the Charmer to whom we owe the conquests of learning and the progress of civilization; but the marvels which she brings about secretly are more admirable than those which are obviously confirmed. She is active in each organism. Without her the unconscious cells could not compete for the common good.

Oswald Wirth, The Tarot of the Magicians, p. 106

O God, who declarest they almighty power most chiefly in shewing mercy and pity: Mercifully grant unto us such a measure of thy grace, that we, running the way of thy commandments, may obtain thy gracious promises, and be made partakers of thy heavenly treasure; through Jesus Christ our Lord. Amen.

I am the light of the world; thy strength is made perfect in weakness.