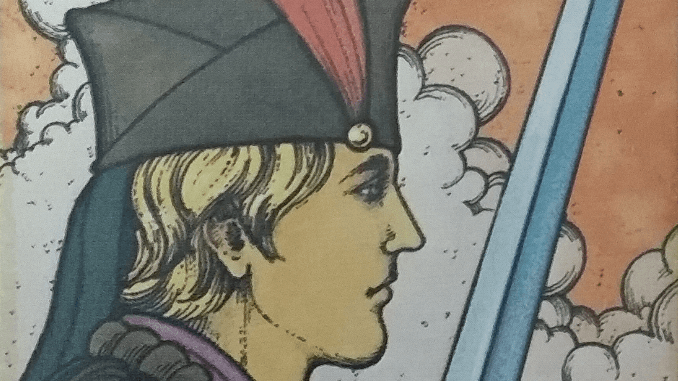 As I said on Monday, when the Page of Swords first appeared, this arcana is the element of air grounded in earthy Capricorn. Our Mercury is in his airy domcile of Gemini, which magnifies the influence of the airy, sword energy of the arcana. The reappearance of this arcana today, on the day dedicated to Mercury, is especially significant; any arcana appearing twice in a week is of course doubly significant, but appearing on a day when the dirunal planet is in its domicile further magnifies the importance we should attach to the arcana.

At the same time, the earthy element that belongs to the Pages finds its home, as it were in Capricorn, where Saturn, the ruler of that sign, happens to be in retrograde. So now is a good time to rethink your values, objectives, thought processes and who you think you are.

At the same time, Mars is in progressive (airy) Aquarius which may assist in challenging the status quo and in expressing our unique self when taking action in life. Now we know that Mercury is in on the project of mental transformation too, assisting you in communication your ideas and intentions – if only to yourself!