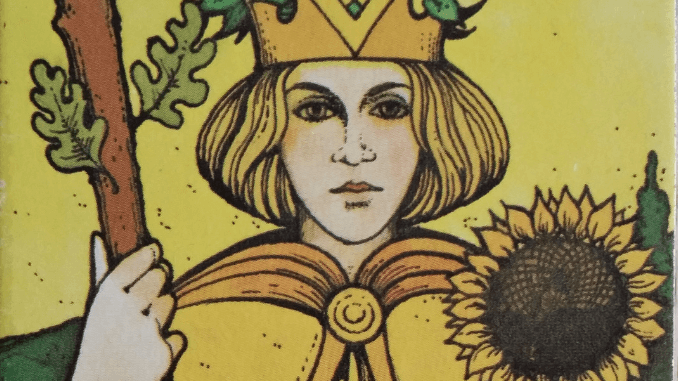 The Queen of Rods offers in a single court arcana the combined influences of the (19) Sun and (14) Temperance for she is both the most solar of the Queens and balances the elements of fire and water as does (14) Temperance. We can therefore consider her appearance in the fourteenth week after Trinity as an augmentary blessing upon today and the week as a whole. We should also note that the Queen of Rods appeared last week ahead of the Five of Pentacles, and this week she has appeared after the Five of Pentacles, marking the passage of the intervening days as being days of trial overseen by the warmth and blessings of our leonine Queen Indeed, it may be she who is the lady giving succour to the wounded wayfarer in the Five of Pentacles.

Leo happens to be my ascendant sign in my natal chart so I love seeing the Queen of Rods whose feminine energy transmutes the fire of her element into a nurturing and intuitive force for generation and any kind of creative activity. For me, the days between her two appearances have been taken up by both chess and my teaching contracts, both of which give me a lot of joy and stimulation. Tonight, I shall play chess for the first time since the end of the Hiroshima Open Chess Tournament on Monday.