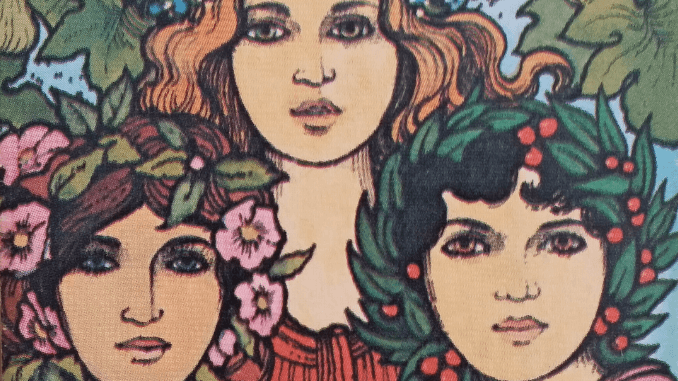 This weekend we have been enjoying the full moon, the Harvest Moon, which has just entered Pisces. It is a good time to reflect upon the harvest of the year in our own lives, and our receptivity to the blessings of life. The Three of Cups sets that as the theme for this week. Here are the qualities we are invited to nurture through the Three of Cups:

The 3 Graces In The 13th Week After Trinity

As this is also the thirteenth week after Trinity we have another, tougher, earth-bound sense of the “harvest” in the arcana of (13) Death and the grim reaper. But we also have, in the parable of the Good Samaritan the antidote. As Everyman descends from Jerusalem into the Valley of the Shadow of Death, down towards Jericho and the Dead Sea, the agents of death and destruction set upon him. They (1) wound him, (2) rob him and (3) leave him “half dead.”

A passing (1) priest and a (2) levite, the representatives of legalistic religion and tribalistic privileges, pass by “on the other side,” but a (3) Samaritan, the archetypal “outsider” or “heretic,” imbued with the trinitarian spirit of Grace, “had compassion on him.” It should be noted that the progression of the three characters moves from the priest who (1) “saw,” the levite who (2) “looked,” and the Samaritan who, “when he (3) saw him had compassion.” The first two live according to the dead letter, the third according to the spirit of one who has been initiated into the arcana of the (12) Hanged Man (as we saw in Trinity 12 last week).

And from that grace-abounding spirit, what an outpouring there is! He sees directly into the heart of the matter with the radiant eyes of Aglaea; he pours oil and wine into the wounds bringing relief and gladness to the traveller, like Euphrosyne; he brings him to an inn and cares for him with the gentle and nurturing spirit of Thalia. What a blessing it would be, my friends, to live in that spirit this week.