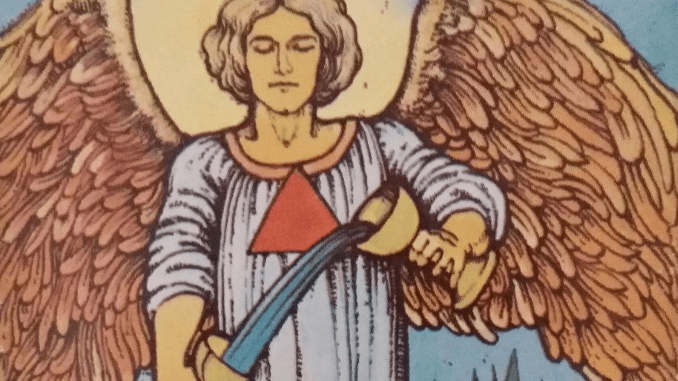 With the preponderance of Sevens over the last few days, the appearance of arcana fourteen, Temperance, is most welcome. Temperance is associated with Sagittarius and the element of fire, shown forth by the upright red triangle on the angel’s breast, and her golden wings. Fire is used in the technique of tempering, as the metal being worked upon is first heated in a fiery furnace and then quenched in water.

The moistness of this arcana is clearly evident as Temperance not only pours liquid from one cup to another, but also has one foot dipped in the water, the other lightly balancing on the earth. Her association with Irises reminds us that the goddess Iris whose rainbow combines qualities of sunlight and water.

Temperance is the arcana of the middle path. If with the sevens we have seemed to be unstable, pulled this way and that, Temperance transmutes the vacillation of our heart by softening and trying it so that it may be refashioned with greater resilience such that we may not swerve from the middle path but keep our course and ascend steadily to Sun which we can see above the mountains in the distance.

The Planets Assist the Quest for Temperance

Speaking of the Sun, we can find assistance in grounding ourselves through the sidereal Sun’s presence in grounded Capricorn, and the Moon’s passage through grounded Taurus. At the same time Saturn is in Sagittarius, which greatly assists the work of (14) Temperance. At the same time, with Venus sextile Saturn, reconfirming that the potential giddiness of the Seven of Cups of a couple of days ago is restricted by Saturn’s sense of responsibility and good order. Finally, Mars is in Ophiuchus, his vigour connected with the healing energies of that constellation.