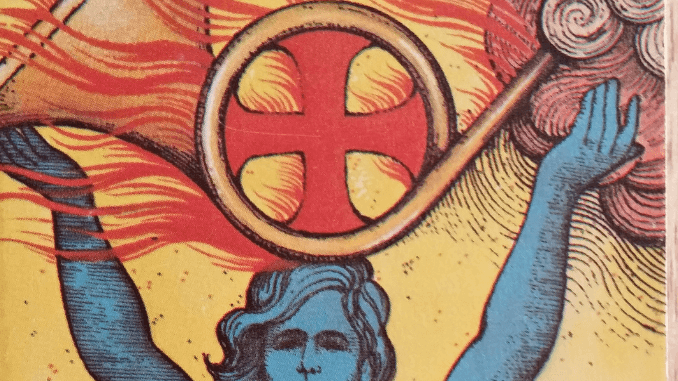 When (20) Judgment appeared at the beginning of last week I mentioned that it signified the beginning of a new and expansive phase, though modified by the waning moon. This week as we pass through the New Moon phase, with the moon in pragmatic Virgo, we again encounter (20) Judgment, but this time shifted to Monday, following the Six of Swords on Sunday. Thus the theme of rebirth into a new phase of life is doubly emphasised; first by the image of the boatman punting the boat across choppy waters; second by the image of the boat, now in the form of a coffin, floating on the face of the deep, with the three figures who are in the boat (in the Rider Waite version of the Six of Swords) now rising to their new spiritual life. Whereas the sublunar aspect of life was emphasised in yesterday’s arcana, it is the solar, spiritual, experience of life that is emphasised today, suggesting a unity of the two as the latter operates upon the former: