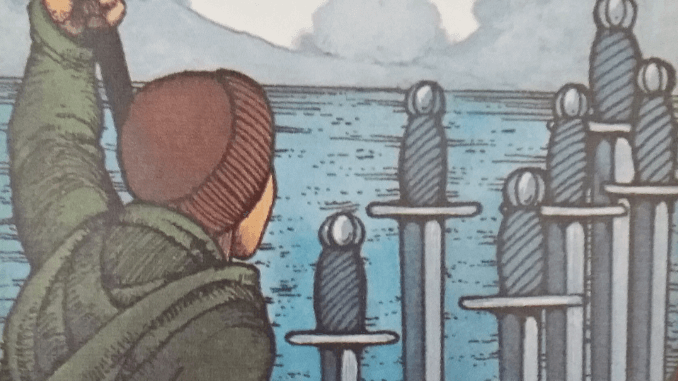 The theme of the Six of Swords is one of journeying onward and leaving behind limiting beliefs and heading for the open waters away from the choppy waves to the promising landscape on the opposite shore. The spirit is still oppressed by the past, but a glimpse of that promised land may now be had. The figure sat in the boat seems to be oppressed by the swords in front of her, as if she cannot yet see beyond them. The boatman, however, is looking beyond them to the destination in the distance. It may be that a part of us is still oppressed by the past but at the same time there is that within us that is able to look beyond them and keep moving us through the waters to a brighter future.

The 6 of Swords in the New Moon

The New Moon October 27th and 28th is in pragmatic Virgo for the second time this month according to the observations of sidereal astrology. It’s a another new lunar cycle involving pragmatism, improvement, and “doing the work” and developing ourselves improving things, focusing on the details, focusing on the structure. The moon is in opposition to Uranus, which is in fiery Aries, which can be rash and energetic in its urge for freedom. What we see in the Six of Swords is the striving for freedom and change, but incorporated into the disciplined focus on “doing the work” to keep punting ourselves towards those quieter waters and greener pastures so that we can better develop our true potential.