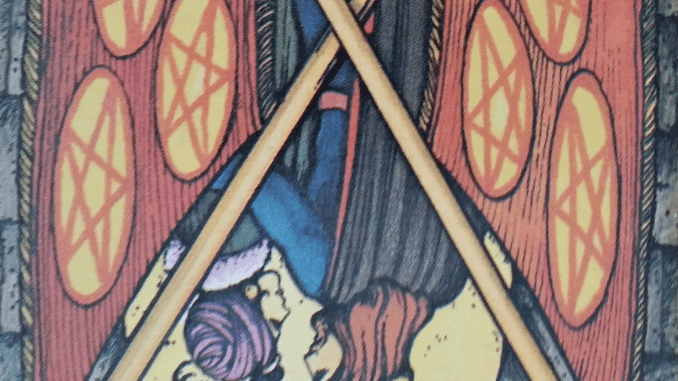 The Ten of Pentacles is ruled by Mercury in Virgo and the reversal of today’s arcana reminds us that Mercury is in retrograde (in Libra, from a sidereal perspective) until the 20th November, while Virgo is entertaining Mars which gives a dynamic energy to the pragmatic concerns of the constellation.

As we have drawn the Ten of Pentacles on a Friday it behoves us to consider the arcana in relation to Venus. As Venus and Mercury are friendly planets even when Mercury is in retrograde, although there may be a crossing of wires in human relationships, especially as relating to material considerations, any negative outcome will be comparatively mild although it may feel disruptive at the time; Venus is in Ophiuchus so any misunderstandings may ultimately serve to deepen trust.

Thus, the sense of wealth and plenty that the Ten of Pentacles conveys when upright is still there in its reversed form today, but the couple do not enter the gate at this stage. It is rather as if a merchant ship, returning home laden with merchandise, has to wait in the offing for a favourable wind and tide to carry it home.

Since Tuesday of this week the arcana have communicated a need to re-evaluate your situation and today it would be beneficial to look at projects that may have become neglected or becalmed and think about how you can turn them around and infuse them with new life and vigour, restoring to them the energy of the King of Cups, who presides over the solar energy of this week.