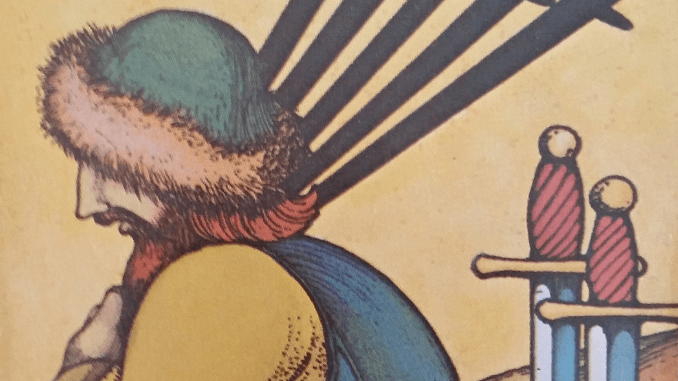 The Seven of Swords is known as the Lord of Unstable Effort, ruled by the Moon in Aquarius (hence the lack of stability). The sidereal Moon is actually waning gibbous in grounded Taurus today, so we might characterize the “unstable effort” of today’s arcana to be related to our attempt to develop our inner resources. Taurus is ruled by Venus as is the 7th house of the Kaballah.

Venus enters Ophiuchus today. Ophiuchus is a constellation which relates to the shadow side of our consciousness, as suggested in today’s arcana by the shadowy swords all appearing to pierce the head of the furtive fellow who is running off with them.

Revealing and Healing Our Shadow Side

Thus today’s arcana calls attention to our mental wounds, especially those buried deep in our shadow side which Venus in Ophiuchus can help us to accept, heal and integrate in a healthier and more holistic and (with the Moon in Taurus) a more grounded sense of ourselves, our past, present and future.

In this video Athen talks us through the sidereal aspects of today: