The Second Sunday After The Epiphany 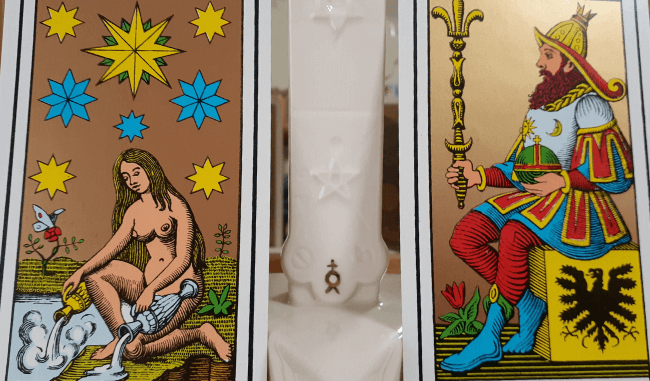 The themes of this week have to do with imperial themes of peaceful governance and alchemical transformation, such as the miracle at the marriage in Cana, which such a peace enables. Thus, this week is presided over by the (4) Emperor, the embodiment of governance in his highest form of the Divine Logos, the agent of transmutation. Keep in mind that the (4) Emperor is associated with fiery Aries, the white ram, and ruled by Mars, the red planet. Aries is the first sign of the zodiac, which marks the passage (or passover) of the Sun as it passes over the equator bringing light and warmth back to the northern hemisphere.

In Saint John’s account of the Marriage at Cana, Mary is present at the wedding as the “mother” of God and also as “woman.” We see her in the seasonal arcana of the (17) Star with Christ as (4) Emperor placed beside her. Maria, the Stella Maris and Christ the transformer of water into wine. It should also be noted that the numerology of the story point to this being the seventh day if you count the chronicle of days from the commencement of the Gospel of Saint John to the narrative of the marriage at Cana, which opens, “On the third day…” The third day is also anticipating the resurrection of Christ; the ultimate transmutation of matter into spirit. In the story of the marriage at Cana, it is the six water vessels which are suggestive of the first six days of creation before the transforming miracle of the seventh day. Six is at the very centre of the kabbalistic tree of life; it is beauty, it is Christ Consciousness. We might also contemplate the Six of Cups in relation to today’s meditation, for there we have the Sun in Scorpio, the Lord of Pleasure, a celebration of the fullness of nature, a sharing of the “best wine” of life here and “now”; it is a wonderful thing to note that the first miracle takes place through the intercession of Mary to keep a marriage banquet going.

Almighty and everlasting God, who dost govern all things in heaven and earth; Mercifully hear the supplications of thy people, and grant us thy peace all the days of our life; through Jesus Christ our Lord. Amen

His delight is in the law of the Lord: and in his law doth he meditate day and night.

Thou has kept the good wine until now.

I am the root and offspring of David, the bright and morning star. Blessed is he who cometh in the name of the Lord.