Epiphany And “The Law of Change” 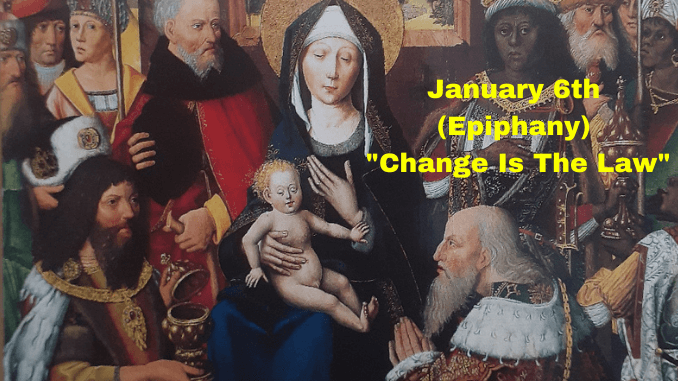 Each morning this year it is my intention to read the passage for the day from The Daily Laws by Robert Greene. There is a change of emphasis in reading on 6th January. For the first few days of the year the focus has been on discovering your calling by listening to your inner voice, the voice that was there when you were a child. Then, on 6th January a new “law” is offered, which is the law of change:

Adapt your inclinations. Avoid having rigid goals. Change is the law.

This “law” is really about adapting your Life’s Task to changing circumstances, which is easier said than done! The mercurial quality of “adaptability” is vital if we are to flourish in an uncertain world.

…if a man acts with caution and patience and the wheel [of Fortune] turns in a way that favors his course of action, he will flourish; but should the wheel turn again, he will be ruined if he does not change his manner of proceeding.

The 6th January marks a change of season from Christmas (which ends on Twelfth Night, midnight on 5th January) to the Epiphany, the arrival of the three magi, or wise men, or kings, from the East, and therefore known as “the manifestation of Christ to the gentiles”.

Would it be possible to make any connections between Robert Greene’s “law” for 6th January and the feast of the Epiphany?

Well, for one thing, the Star announced to the Magi that a portentous change had occurred somewhere in the West; a king had been born in Bethlehem. That is how they interpreted the star and changed their “manner of proceeding” accordingly, by leaving their homeland and following the star with open hearts and minds.

The Wheel of Fortune

The goddess Fortuna, daughter of Jupiter, turned her wheel and the magi adapted themselves to an auspicious change in circumstances.

Later in the story, you will remember, the wise men had to change their manner of proceeding again, and instead of returning to Herod, they legged it by a different route, for Fortuna had turned her wheel again and those most in danger, who did not notice or respond, were slaughtered by the jealous rage of King Herod.

In short, the magi are excellent exemplars of Machiavelli’s teaching and of Robert Greene’s sixth Daily Law. They show us the politic value of adaptability here in our daily affairs where dame Fortune spins her wheel.

Chaeremon the Stoic on the Change of Heart of the Chaldeans

The magi also remind us of the value of “change” and of “adaptability” on the higher, or spiritual plane.

According the Renaissance scholar (we might even say “magus”), Marsilio Ficino, the church father Origen discusses a passage which Chaeremon the Stoic wrote, presumably in his book, On Comets, explaining that Chaldeans came to the conclusion that their own daemons had lost power. Thus concluding, they “underwent a change of heart” and went to Judea “to worship one more powerful than their own,” which, to my mind, shows admirable adaptability to circumstances while keeping in view their specific Life Task of “worshipping God most high” as the carol puts it.

Here, they move from worshipping their own individual daemons to worshipping the Universal Daemon if one may speak so of the Divine Logos which manifested itself as the child of Bethlehem, and which speaks to them in the language of their own cultural heritage.

The Magic Of The Epiphany

Thus, if those Chaldeans of Chaeremon were indeed the “wise men from the east,” as Matthew calls them, then they were led to Christ through the motions of the heavens which they gazed at and interpreted through their own ancestral wisdom, not Jewish law and of course not Christian faith, but gentile wisdom recorded in their own books.

And it is this that adds to the magic of the story of the Magi; that, embedded in the gospel, there is a story that speaks of the value of adaptability, whether it is the Magi adapting to the message of the star, or the mercurial quality of the Divine Light itself which manifests in a specific form comprehendible to a particular culture, which those who are called therefrom can own as their own.

Photo source: A section of a postcard of the Worship of the Kings, by “Meister der Verherrlichung Mariae,” 1480, Suermondt-Ludwig Museum, Aachen.