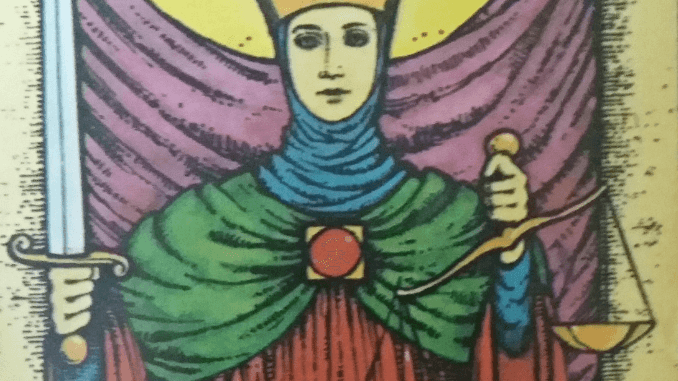 This has been quite a mixed week for me. The underlying movement has been positive, in alignment with the Ace of Pentacles, in spite of the mid week folly of experimenting with a scammy Bitcoin site. In the world of work, as a teacher, I have had a productive week, and some very happy engagements in the classroom, but there has also been some restlessness and a feeling of “futility” in what I am doing as a teacher in some instances where there is a mismatch between courses and students.

Indeed I spent the last 48 hours seriously thinking about applying for a full time post at a university in Nagoya, that is, committing to a full time, tenured post, or at least, applying for such a post.

However, (11) Justice calls upon us to look with open eyes and deeper introspection into ourselves to weigh ourselves and our ideas or aspirations in the balance and cut out with the sword of truth those things that do not serve us.

This is a long weekend here in Japan and so, after ten weeks of solid work, it is an opportunity to rest and bring our lives back into balance.

What then of that job opportunity that I was thinking about applying for? The application requirements are ridiculously onerous and remind me that even if I were to get through the interview and be offered the job, I would no longer be as independent as I am now, but at the beck and call of others, with very little time to call my own. I would also be cutting myself adrift from my true vocation which is to run my own business. I would be selling myself short on my dreams in the pursuit of security and respectability.

The third week after Trinity sees the (0) Fool arrive at the house of the (3) Empress on his progress through the Upper Arcana. This year, the (3) Empress offered the (0) Fool the Ace of Pentacles, symbolizing the potential we have to tap into the plenitude of the material world, so there was a good deal of positive potential on offer even though, as I mentioned in various blog posts through the week, that the more melancholic feeling of Saturn seemed to be prevailing here in Hiroshima with little sign of the sun in the overcast sky all through the week.

It turned out that the Ace of Pentacles would be framed by a double occurrence of the 9 of Rods with its more defensive posture towards the world. On Monday I interpreted the 9 of Rods in the light of a dream I had of the disconcerting approach of female forms – mortals or nymphs I could not say – towards me through a wood. I saw this experience as a search for wholeness and integration.

The middle of the week proved somewhat challenging as the (0) Fool Reversed was followed by the (16) Tower, suggesting a combination of folly and the destruction of rigid structures. Having undergone some frustrations in my work and a foolish loss in a Bitcoin transaction I passed back through the 9 of Rods which reminded me to defend the good things that I have achieved through work and effort – to the firmer ground of the 3 of Pentacles, to a renewed sense of improving my skills in the vocations that I have. The week concluded with the well-weighed judgment of (11) Justice, which helped me to understand what I ought and ought not to do with regard to work and business, that is, with regard to the potential on offer in the Ace of Pentacles that the (3) Empress offered the (0) Fool at the beginning of this, the third week after Trinity. From that perspective, this week appears to have been one in which the (0) Fool took a tumble, but did not drop the gift of the (3) Empress; instead, it helped him to unlock the rusty door of the dungeon of the (16) Tower and get back onto the true path.