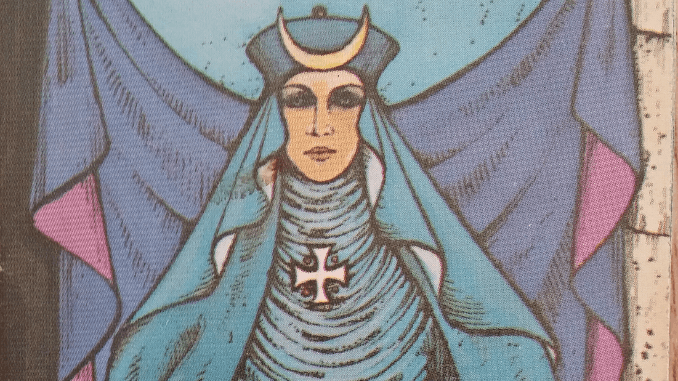 The Piscean energy of the current Full Moon is asserting itself through our daily tarot with yesterday’s King of Cups and today’s ethereal (2) High Priestess, whose element is water and whose planet is the Moon. Pay particular attention to your nocturnal dreams and the deeper feelings associated with them at this time. Your dreams may relate to the outer world, but pay particular attention to the archetypal structures they are communicating; the (2) High Priestess and the upper arcana as a whole deals more with the inner than the outer creature and the progression over the last three days from the Five of Swords to the King of Cups to the (2) High Priestess reflects that movement from outer and more intellectual concerns to inner and more soulful contemplation.

I dreamt last night that a bunch of tough angry and threatening guys were out to get an acquaintance of mine. I felt threatened and compelled to give them his name for my own safety, and then to make sure they got the right person, I confirmed the name and mentioned his dark beard so they wouldn’t go after the wrong person. In short, I betrayed my acquaintance.

One interpretation is that I might be dealing with unresolved feelings of guilt or shame. I doubt that would be in connection with the actual subject of the dream, but since we have been attempting to arrange to meet up for a game of chess and a couple of appointments have fallen through, it may be that the “disappointment” I may have registered (even if it was not “deeply” felt as such) has drawn up a deeper feeling of guilt or shame about my actions or events much further back in the past, which when remembered induce,

the rending pain of re-enactment
Of all that you have done, and been; the shame
Of things ill done and done to others’ harm

I have had two other dreams of being somehow threatened or insecure from the previous week. In one, I was roaming in some kind of countryside where all manner of creatures were loose, including particularly prowling lions and trampling elephants… In the other dream, I was suddenly aware that someone was staring at me from behind and when I turned I saw a face fixed in a rigid stare with stone cold blue eyes.